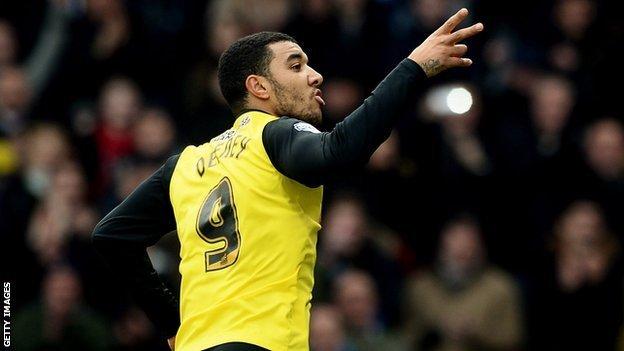 Watford ended a run of 10 league games without a win by beating Millwall in new Hornets manager Beppe Sannino's first home game in charge of the club.

The hosts went ahead when Millwall defender Danny Shittu was sent off for a foul on Troy Deeney, who picked himself up to score the penalty.

A Fernando Forestieri strike and an Ikechi Anya effort put Watford 3-0 up.

A Steve Morison handball allowed Lewis McGugan to then add a fourth with a penalty to round off a comfortable win.

Sannino recently replaced Gianfranco Zola, who resigned as Watford boss, and the win on his Vicarage Road bow will have come as a relief for his side after a run of five successive home defeats.

Watford's poor form had also seen them not score in their previous four home outings but that barren spell ended after 10 minutes, when Deeney scored his 11th goal of the season after converting a spot-kick following Shittu's challenge.

The Hornets made the most of their numerical advantage, soon doubling their lead when Sean Murray found Anya, who played in a first-time cross which Forestieri stabbed in.

Just after the break, Anya turned goalscorer in impressive style when he cut in from the left and sent a powerful strike into the top corner.

The game was more of a damage limitation exercise for Millwall, who only avoided conceding a fifth when Forestieri's strike hit the post.

"I'm very happy for my players, for the supporters, a thought goes to [former manager] Gianfranco Zola as well and we wait for the next game which, for sure, will be a tougher game [against QPR].

"We had the chance to play 11 versus 10. Normally with this type of game, if you don't play with your head you can have trouble.

"My players were fantastic because they were waiting for the right moment to go deep and to score. I would like to enjoy this moment but also to forget very quickly this win because soon we have to play again."