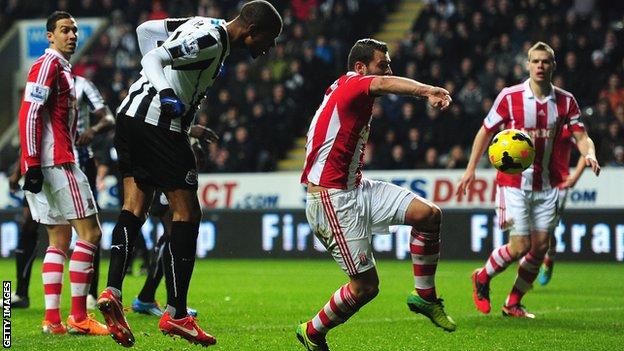 Oussama Assaidi put Stoke ahead but they then had Glenn Whelan sent off for a second yellow, before Marc Wilson saw red for fouling Remy in the area.

Remy's penalty was saved, but he soon equalised with a deflected finish.

It was Newcastle's biggest win of the season and boosted their hopes of earning a European spot this season as they closed the gap on fifth-placed Everton to one point.

Having briefly found themselves nearer the bottom half of the table early in the season, Newcastle have improved considerably with the help of the club's French contingent.

But it was another Frenchman who shone in this fixture as Hatem Ben Arfa - starting in place of the suspended Cheick Tiote - proved a constant menace.

The midfielder's flair and invention troubled the Stoke defence from the outset and the former Marseille man produced the home side's first real chance when he curled an effort just wide.

Charlie Adam, employed in an advanced midfield role, was finding plenty of space for Stoke as they grew into the game and he twice hit long-range strikes narrowly off target.

Adam provided the assist for Stoke's opener midway through the first half, laying the ball into the path of Assaidi, who curled a shot into the top corner.

Stoke's joy was short lived as a dramatic couple of minutes just before half-time turned the game on its head.

Whelan was shown his second yellow for a needless foul on Cabaye, a decision that evidently angered manager Mark Hughes, who was sent to the stands by referee Martin Atkinson for expressing his frustration.

It got even worse for Hughes and Stoke moments later as Vurnon Anita fed a pass for Remy and the striker was brought down inside the area by Wilson.

Atkinson pointed to the spot, before sending Wilson off.

Remy's spot-kick was saved by Stoke goalkeeper Thomas Sorensen - in the side for the injured Asmir Begovic - but he made amends with Newcastle's next attack, equalising with a deflected shot.

Newcastle then took the lead three minutes into the second half.

Ben Arfa's cross was headed into the air and Sorensen meekly punched the ball straight to Gouffran, whose low shot crept in.

The two-man deficit for Stoke was telling as the visitors found themselves largely entrenched inside their own area, inviting Newcastle to push forward.

Cabaye then curled in to extend Newcastle's lead.

But there was time for a fifth when Erik Pieters was adjudged to have fouled Ben Arfa in the area and substitute Cisse scored from the spot for his first league goal of the season.

"I thought the Stoke players conducted themselves brilliantly in the second half - against our strike force and down to nine men. It was a shame for Stoke because the two sending-offs were a major factor in us winning in the manner we did.

"Arsenal [Newcastle's next opponents] are top of the league. That is deserved, they have been the best team in this first half of the season, but we are in great shape, our place will be rocking and rolling and Arsenal know it won't be easy to turn us over."

"It went wrong when the referee got involved. I thought the initial sending off was very, very harsh. The second you would argue is a correct decision - denying a goal scoring opportunity - we would argue against that.

"There were a lot of decisions that left a lot to be desired to be honest. We totally controlled the game up to the first sending off in my view. Unfortunately referees can make decisions that can change the course of a game."