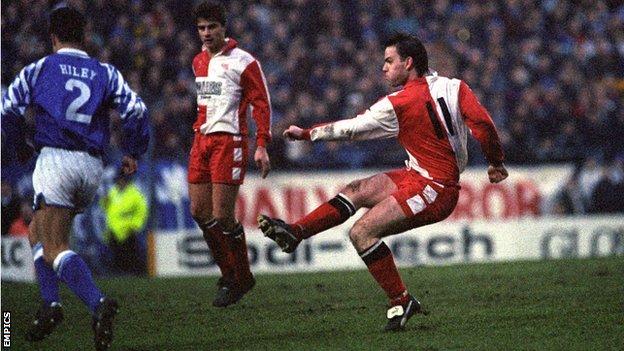 Like any long-serving football legend, Barry Fry has had more than his fair share of ups and downs in the game.

Just as memorably, Peterborough United's director of football has been responsible for a colourful turn of phrase to describe almost all of them.

But ahead of Saturday's FA Cup third-round tie between Kidderminster Harriers and Peterborough at Aggborough, the 68-year-old recalls with total clarity the day he turned the air bluest of all.

Fry had only been manager of Birmingham City for a month when they met the Harriers at St Andrew's in January 1994. His team went into the FA Cup third-round tie bottom of Division One, looking certain to drop to the third tier of English football, while their non-league visitors were flying high at the top of the Conference.

An accident waiting to happen? Sure enough, the end result was a 2-1 away win.

"Without a doubt, that was the worst day I ever had to suffer," Fry says.

The result catapulted Harriers into the national spotlight, as they went on to become only the fifth of seven non-league sides to reach the FA Cup fifth round since World War II.

"It was obviously an upset," recalls matchwinner Jon Purdie, whose stunning 25-yard strike midway through the second half must have come close to wearing out video recorders throughout the Worcestershire town after it was shown on Match of the Day later that same night. "But I actually wasn't that surprised.

"We'd been going well since the end of the previous season when we'd gone unbeaten over our last 14 or 15 games," Purdie told BBC Sport.

"We were top of the league. And we actually quite fancied our chances."

Being the sort of larger than life, big-hearted chap he is, Fry actually agrees, looking back now at that day almost with fondness.

"It's what the FA Cup's all about," he said. "It was a big upset and it was a great day for Kiddy.

"But it was not the greatest-ever day for Birmingham City.

"Coming from non-league like I did, at Barnet, I knew all about Kiddy and their manager Graham Allner, and what sort of football they could play.

"And we could not have picked a worse time to play them.

"I'd only been at Blues a month, we were bottom by a mile, on our way down and, looking back, we should not have been that shocked, but that's not what I told the players at the time.

"Admittedly, they had a bit of fortune. Andy Saville missed a penalty when we were 2-1 down that would have levelled it and then he had a goal disallowed. But you need some luck in the cup."

Purdie is the first to admit that good fortune was on Harriers' side that day.

Harriers will hold a dinner at Aggborough on 31 January to mark 30 years since Graham Allner, their longest-serving manager, took charge in 1984. Apart from leading the club to the FA Cup fifth round in 1994, Harriers won the Conference title, only to be denied promotion to the Football League as the ground was considered not up to scratch.

"To be honest, Saville's penalty was a bit weak," he said. "He did not catch it all right and it hit the post. It then looked like he'd made amends when he scored a few minutes later, but it was ruled out for offside and I really couldn't see why."

Purdie, now 46, with a telecoms business and a part-time role coaching Stourport Swifts after leaving his position joint-manager of Old Wulfrunians a month ago, is also quick to maintain that they deserved everything they got in that FA Cup run.

"We had a couple of players that day at St Andrew's, John Deakin and Martin Weir, who had been on Blues' books and had a bit more to prove than the rest," he added.

"But, to be honest, most of us had played at Football League level, we were a good unit, a team full of players who got on well and trusted each other. And we were confident that we could get a result."

It was the same story when Purdie crossed for Delwyn Humphreys to turn and fire home the only goal of the game in the fourth round, to beat a Preston North End side that included a youthful David Moyes.

And it again took just one goal to settle it when Harriers played West Ham in the last 16, Lee Chapman heading the Premier League side through late on.

"Both sides looked happy to settle for a draw. West Ham, because they knew we'd given them a good game, and us because obviously we all fancied a trip to Upton Park," recalls Purdie.

"But, while our keeper Kevin Rose had an inspired season, he picked that day to make just about the only mistake he made.

"And he came for a cross late on when he shouldn't have done."

For all the continued heroics that season, and the first and second-round wins over Chesham United and Woking that had gone before, that January day at St Andrew's remains just as much a lifetime highlight for most Harriers fans as it was the lowlight for Fry.

After failing to keep Blues up by just a point, despite a Steve Claridge-inspired late revival that saw them win six of their last nine matches, Fry led his side back up as Division Two champions a year later, only to be replaced by Trevor Francis when Birmingham, with renewed ambitions, could only finish 17th back in the second tier the following season.

I'm amazed that this game was not chosen for TV

Fry was not out of work for long, joining Peterborough, where he has spent the last 17-and-a-half years in a variety of positions.

Given his role now, as director of football, Fry still eats, sleeps and breathes football.

And, given the continued speculation linking Posh with a January transfer window move for young Harriers striker Joe Lolley, he freely admits that he has made more than one trip to Aggborough this season.

"I've seen them three times this season," he said. "They've got some useful players. And they've clearly got goals in them.

"They were going really well when the draw was made a month ago.

"Mind you, so were we. And I'm amazed that this game was not chosen for TV.

"We've both gone off the boil a bit since, but I'm still staggered that they've not even been chosen for the highlights. That would have earned Kiddy a few bob."