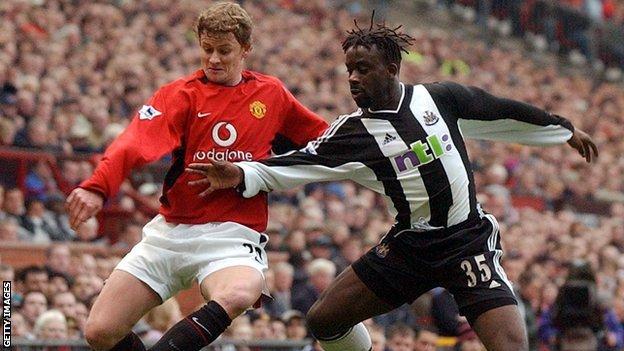 They were two Gateshead lads playing for England against Germany in the semi-finals of the 1990 World Cup, football's grandest stage, and coming tantalisingly close to a shot at the game's biggest prize.

To console them were 20 squad-mates, another three of whom hailed from the north east of England - not to forget their Durham-born manager.

Bobby Robson's team - which also included Peter Beardsley, Trevor Steven and Bryan Robson - achieved the best result by an England team since Bobby Moore lifted the famous Jules Rimet trophy in 1966. But in the recent qualification process for the 2014 World Cup, Newcastle-born Michael Carrick was the only north easterner to wear the three lions.

"I look at the England team and think 'how many of them are from around here?' There should be far more," he told BBC Sport.

During his playing career, the Frenchman reached the last 16 of the Champions League with the Magpies, playing in Milan's San Siro, Barcelona's Nou Camp and even in Turin's Stadio delle Alpi, the site of England's most glorious of failures.

Now, he will watch his Durham side at New Ferens Park - a ground with a few hundred seats and an artificial pitch.

"For the level the club is playing at, this is a fantastic stadium," he said. "In five to seven years I want Durham to be in the Conference Premier."

Currently, the Citizens play in Northern League Division One - the ninth tier of English football.

"I want to make Durham one of the best feeder clubs in this region," he explained.

"At the moment, I don't think the area develops enough players. I want the three big teams to see this as a place to send their youngsters.

"I'll do everything I can to get around, bring players to Durham, and help develop them in an environment they'll enjoy - that is the key."

Injury curtailed the Paris-born left-back's career in 2007, shortly after he had returned to St James' Park in the hope of adding to his 145 Newcastle appearances. He didn't play again.

Since then, he has worked as an ambassador for anti-racism group Show Racism the Red Card.

"Often it's an awkward topic for people to speak about, so by going into schools, and giving public talks it helps break that down," said Bernard.

"Then a few months ago, I got introduced to people at Durham City and the idea was put to me about potentially buying it.

"I saw the facilities and looked at the size of the catchment area. This is a big place, not a little town. Durham should have a much bigger football club."

Having started his career at Olympique Lyonnais, Bernard was signed by then-Newcastle boss Sir Bobby Robson in 2000.

How big is Durham?

The City of Durham has a population just short of 100,000 people, while the county of the same name has nearly 400,000 inhabitants.

It is one of just four British counties, along with Cornwall, Northumberland and Rutland, without a professional football club.

After leaving five years later and then having short spells with Southampton and Rangers, he returned to his adopted homeland.

"I had a wonderful career at Newcastle and when I retired I could have gone back to France and I didn't want to," he said.

"The people up here are so warm, a lot more than in Paris. People have so much time for you - I see this as a way to give back to that community that has treated me so well.

"Primarily, I want to raise the profile of Durham City to make it a successful grass-roots development project. And I will do it, I know I will."

For a county it may not be such a pipe-dream for Bernard to have the next Waddle, Gazza and Robson learning their trade at Ferens Park. Penalty practice would not go amiss either.