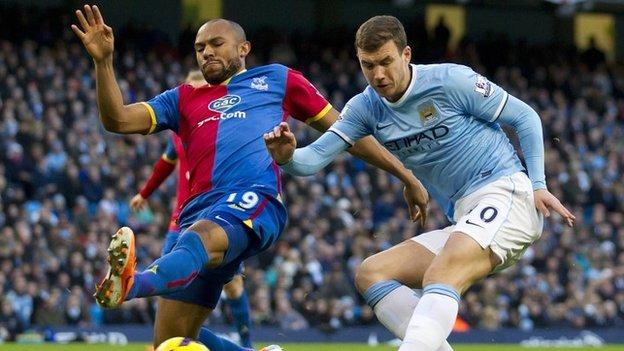 Manchester City moved to the top of the Premier League table after Edin Dzeko's 50th goal for the club defeated Crystal Palace at Etihad Stadium.

City dominated a first half which saw their England keeper Joe Hart play on after suffering a badly cut eye.

Palace threatened via Jason Puncheon and Mile Jedinak, but Dzeko turned in a Jesus Navas cross to put City ahead.

Joel Ward drew a fine save from Hart and missed the target with a header as City went two points clear of Arsenal.

Manuel Pellegrini's side extended their 100% home league record, with the Gunners facing a tough trip to seventh-placed Newcastle on Sunday.

But after averaging more than four goals a game at Etihad Stadium, City were frustrated by a fine defensive effort from Palace, who limited the hosts to their first 1-0 home victory this term.

Although Tony Pulis's Palace remain a place above the relegation zone on goal difference, that margin did increase after Fulham suffered a 6-0 defeat by Hull.

And following their victory over Aston Villa on Boxing Day, Saturday's performance will certainly give the Eagles further confidence with a vital home game at Selhurst Park against Norwich to come on New Year's Day.

Ward's efforts immediately after Dzeko's goal showed that Pulis has instilled a steely side to his team, though they were perhaps fortunate that City only found the target twice in a first half where they registered 15 shots.

With this encounter coming less than 48 hours after the 2-1 victory over Liverpool on Boxing Day, manager Pellegrini made six changes to the side but Fernandinho and David Silva - who both played in that game - had the biggest impact before the break.

Those alterations included a first City league start for Dedryck Boyata since May 2011, while Dzeko replaced Alvaro Negredo in attack.

The Eagles did threaten down the left through Yannick Bolasie but the biggest worry for the hosts came when Hart suffered a nasty cut just below his left eye after a collision with Cameron Jerome.

Hart received treatment on the pitch and was fit enough to continue but Palace striker Jerome was forced off with what appeared to be a knee injury.

Hart reappeared for the second half with his injury clear to see but he remained alert to palm Puncheon's shot wide with substitute Marouane Chamakh heading over from the resultant corner.

That scare, along with frustration from the home supporters, prompted Pellegrini to go on the attack and he brought on Negredo and Samir Nasri for Fernandinho and Boyata.

But City were less fluid in the second period and Palace grew in confidence with Puncheon curling wide before Hart tipped Jedinak's long-range effort over the bar.

However, Dzeko appeared to settle City nerves when he tucked in Navas's cut-back but Palace continued to threaten and almost equalised through Ward.

The Eagles midfielder saw his first effort tipped away for a corner by Hart, who flung himself to his left, and his header from the resulting corner missed the target.

That proved to be the last meaningful effort from Palace and after Dzeko almost grabbed a second, his side held on for a fourth consecutive league victory.