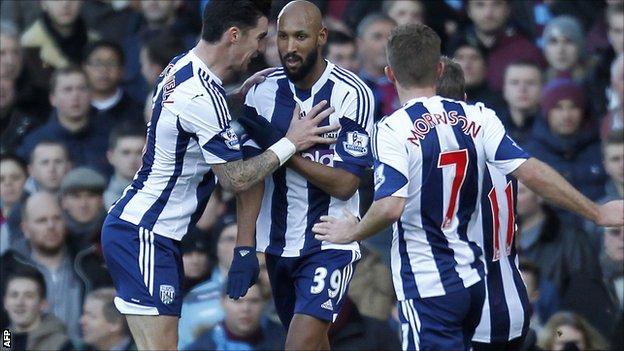 Joe Cole put the Hammers ahead with a low shot but Nicolas Anelka equalised before poking in two minutes later to give the Baggies a 2-1 half-time lead.

West Ham levelled through Modibo Maiga's 20-yard shot and Kevin Nolan prodded home from close range to put the home side back in front.

But Saido Berahino equalised again for West Brom with a fine low strike.

It was the third goal in five breathless minutes at Upton Park in a game both sides needed to win to help in their respective relegation battles.

West Ham are without a win in six Premier League matches as the pressure continues to mount on manager Sam Allardyce, who went into this game describing it as a "must-win" encounter.

His side, who have recorded only two league victories all season, now have key games coming up against fellow strugglers Fulham and Cardiff.

They are attempting to turn around their season against a backdrop of mounting injury problems in defence.

Already without James Collins and Winston Reid, they lost James Tomkins midway through the first half against the Baggies.

West Brom's search for a new boss continues but whoever takes the helm at The Hawthorns will do so with the club scrapping at the wrong end of the table, just two points above the relegation zone, having not won in their last nine.

They should have taken an early lead at Upton Park when Chris Brunt volleyed James Morrison's whipped cross into the side netting.

West Brom were made to pay just a minute later when they fell behind through Joe Cole's strike.

Carlton Cole flicked on Jussi Jaaskelainen's goal-kick and neat interplay between Nolan and Joe Cole released the former Chelsea and Liverpool man who fired a fierce shot past the onrushing Ben Foster.

Half chances for Carlton Cole and Guy Demel followed before Mark Noble curled a 20-yard free kick just wide of the angle.

Nigel AdderleyMatch of the Day commentator

"There were boos from the home crowd on the final whistle as another home game slips away without a victory.

"West Brom may be happy with a point away from home but West Ham head into 2014 deep in trouble and in the relegation zone with two crucial games coming up against Fulham and Cardiff City."

West Brom had been guilty of producing neat midfield passing without any end product but in the final five minutes of the half they not only equalised but took the lead.

Both goals came from Anelka, who was making a return from a two-month absence.

His double resulted in him becoming only the ninth man in Premier League history to score for six different clubs.

The first came in typical Anelka fashion. Latching onto Brunt's through ball he outmuscled and outpaced Joey O'Brien before shooting past Jaaskelainen.

Moments later West Brom were in front after a header from a disputed corner was cleared off the line by Carlton Cole and into the path of Anelka, who prodded home from close range.

The Hammers left the field to a chorus of boos and things could have got worse for the home side immediately after the break but Anelka side-footed straight at Jaaskelainen from close range while Berahino sent a drive just wide.

West Ham finally began to impose themselves on the second half and Joe Cole went close with a fierce free-kick that flew just past Foster's post.

The West Brom keeper was again called into action soon after, pulling off a wonderful full-stretch save to keep out substitute Maiga's curling effort from 20 yards that was heading for the top corner.

But Foster was at fault moments later as he allowed Maiga's low strike from a similar position to go under his sprawling dive.

Nolan then put the Hammers in front from close range following Maiga's nod down from Noble's cross.

But Albion were not finished and Berahino levelled with a wonderful low strike across Jaaskelainen that cannoned in off the post.

The England Under-21 striker then crashed a curling free kick from the edge of the area against the post while Nolan sent a header over the bar as both sides searched in vain for a winner.

"Everyone else enjoyed it apart from me, it was end-to-end, not one for defensive purists. I have mixed emotions because we edged ahead but credit to West Ham, they came back strongly.

"We've come back twice from behind in two days. Nicolas is a top quality player. He's waited patiently for an opportunity. His two goals is what he's all about, a lot of class.

"A lot of credit goes to the academy staff with Saido. He has a lot of ability, he has to keep his feet on the ground, he's got Nico looking after him, always advising him. It's a good combination.

"After the initial shock of what happened with Steve Clarke, the players have galvanised themselves, got together as a group. I'm very proud of them.

"I'll let the chairman and board go on hunting for the right man, I'll carry on as long as they want me to."

For a gallery of images from Saturday's Premier League games please go to the BBC Sport Facebook page.