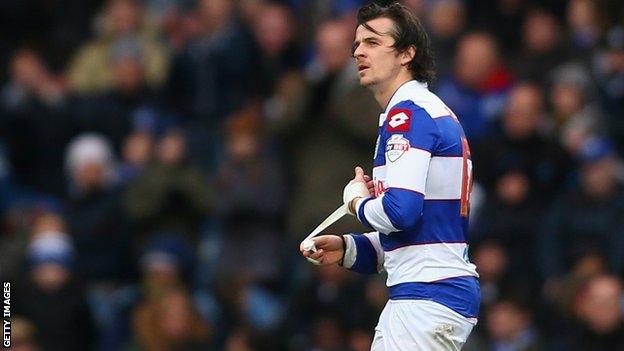 QPR assistant manager Kevin Bond says Joey Barton's reputation works against him, after the midfielder's red card in the

Bond said: "Joey had already had conversations with the ref.

"His reputation doesn't do him any favours. In his position, he can't afford to put himself up for anything."

It is Barton's eighth career red card in his 11th full season as a professional.

Barton tweeted that it was: "The most ridiculous red card ever."

He added: "If that is two yellows, the game has gone.

"Will have to refrain from commenting on the referee for fear of furthering a one-match ban. It would help if we had full-time referees."

QPR manager Harry Redknapp told QPR's official site: "Joey's been excellent for us but he doesn't need to get involved in that sort of stuff.

"He's a fantastic player, he's great in the dressing room.

"I haven't seen the incident again but he's apologised to the lads. I can't fault him. Since I've been here, he's been top class.

"He'll be a miss. But we've got plenty of cover in midfield so it's not an area we struggle in."