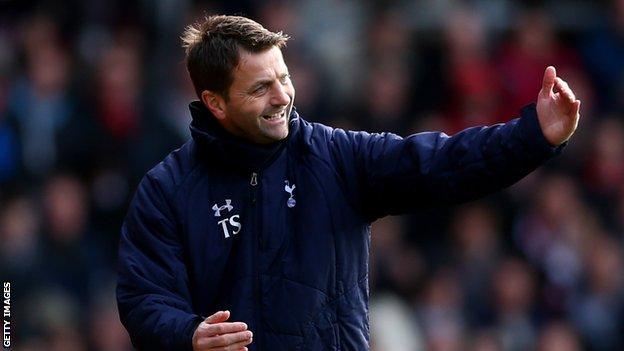 Tottenham have appointed Tim Sherwood as head coach on a full-time basis.

The former England midfielder guided Spurs to a 3-2 win at Southampton on Sunday as interim boss and has now been handed a contract until the end of the 2014-15 Premier League season.

Who is Tim Sherwood?

"We believe Tim has both the knowledge and the drive to take the squad forward," Tottenham chairman Daniel Levy told the club's official website.

Sherwood, who won three caps for England, joined Tottenham as a player in 1999 from Blackburn, where he won the Premier League title in 1995.

He left White Hart Lane in 2003 and moved to Portsmouth but returned as part of the club's coaching staff in 2008 under manager Harry Redknapp.

Sherwood was working as technical co-ordinator when chairman Levy asked him to look after the first team following the departure of Villas-Boas.

The Portuguese, 36, left the club after winning only two of his last seven league games in charge.

"We were extremely reluctant to make a change mid-season, but felt we had to do so in the club's best interests," added Levy.

"We have a great squad and we owe them a head coach who will bring out the best in them and allow them to flourish and enjoy a strong, exciting finish to the season.

"This is the biggest gamble chairman Daniel Levy has taken for a long, long time.

"Sherwood now has to work with players at a whole different level - players with massive egos who will be banging on his door wanting to know why they are not in his team.

"It is not an appointment that is going to please all the fans, because some of them will have wanted a bigger name with much more experience."

"We are in the fortunate position of having within our club a talented coach in Tim Sherwood."

Sherwood has no previous managerial experience, but Spurs rejected an approach by Championship side Blackburn in October 2012 for him to become their boss.

He lost his first game as interim manager when West Ham knocked Spurs out of the Capital One Cup.

But the north London side recovered to beat Southampton, with striker Emmanuel Adebayor, who only featured once under Villas-Boas this season, scoring twice on his first league start of the campaign.

"Daniel Levy has given Tim Sherwood the security of an 18-month deal and he has already shown he believes he is the man for the club's long term, not a stop-gap until a more glamorous name becomes available."

"What would be ideal for me would be to have a chat with the chairman and see what's best for the football club moving forward," he said.

"I need to know what they're thinking. I don't want this job for five minutes.

"It's a massive club with history and tradition. But whatever happens needs to be right for me, too."

A number of managers had been linked with the position since Villas-Boas departed.

Sherwood's first game as full-time boss will be at home against West Brom on Boxing Day.