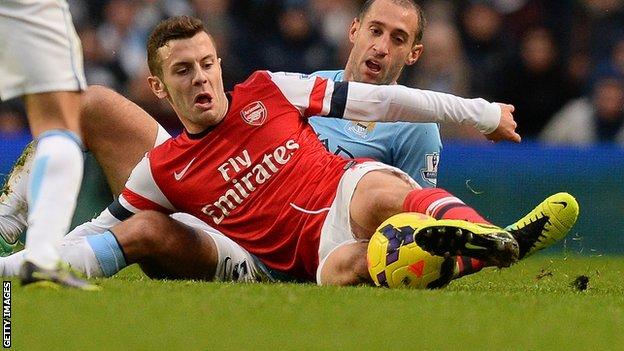 Arsenal midfielder Jack Wilshere says the abusive hand gesture he aimed at Manchester City fans came as a result of jibes about his children.

Wilshere, 21, sat out Monday's draw with Chelsea and misses the trip to West Ham after landing a two-game ban.

"Suppose I will just have to take the abuse about my kids in future," he tweeted. "Anyway, one more game to go! Can't wait to be back."

Wilshere will return for Arsenal's match at Newcastle on 29 December.

After Arsenal were beaten 6-3 by City at the Etihad, the Football Association decided to suspend England international Wilshere after viewing the incident retrospectively.

In another tweet, Wilshere said he was "gutted" not to have been able to play against Chelsea, adding: "Shouldn't of reacted the way I did but I know all you dads out there love your kids the way I do."