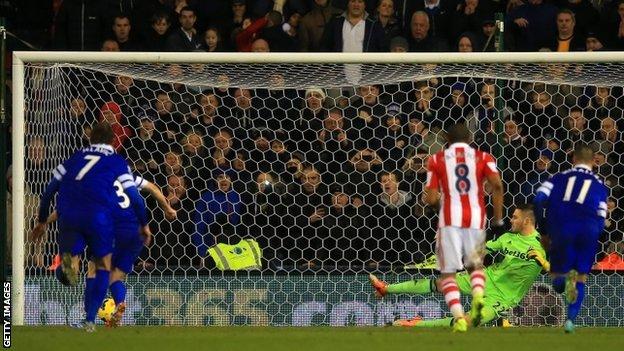 Leighton Baines scored an injury-time penalty to rescue a deserved point for Everton against Stoke.

Everton midfielder Kevin Mirallas had hit the post twice in the first half with efforts from outside the box.

The opening goal came for Stoke against the run of play four minutes after the break, when Oussama Assaidi fired home from 20 yards out.

The late goal completed a miserable few days for Stoke, having lost 5-1 at Newcastle on Boxing Day and 3-0 at Tottenham three days later.

Everton came into the match in buoyant mood, sitting fourth in the Premier League with only two defeats all season.

Roberto Martinez's Toffees have earned plenty of praise this season for both the style and substance of their play. And in right-back Seamus Coleman and striker Romelu Lukaku, they had two of the most talked about players of the season.

However, neither player was at his best, despite Everton having the better of the opening 45 minutes.

Gareth Barry headed over from Leighton Baines' corner and James McCarthy forced a save at the near post from Thomas Sorensen as they pushed for an opener.

Stoke did have chances though, with Peter Crouch heading just wide from a Jon Walters cross and Tim Howard racing off his line to deny Crouch.

Mirallas went very close to giving the Toffees the lead after half an hour when he engineered some space outside the box and fired in an effort from 20 yards which cannoned back off the crossbar.

Morocco international Assaidi is on a season-long loan at Stoke from Everton's rivals Liverpool and he almost opened the scoring when his shot was deflected just wide by Antolin Alcaraz.

And then came two Toffees chances towards the end of the first half. Baines played a one-two with Lukaku and was fouled by Steven Nzonzi 25 yards from goal, and Mirallas' curling free-kick came back off the post. Within a minute, Lukaku, who was subdued throughout, headed wide from close range after a cross on the turn from Coleman.

At half-time, Stoke goalkeeper Butland came on for Thomas Sorensen, who had picked up an Achilles injury in the first half.

And early in the second period, his side were ahead. Everton defender John Stones, making his first Premier League start, headed to ball out to Assaidi, who fired home past Tim Howard.

The Toffees did have chances, with Stoke's Erik Pieters doing fantastically to block Mirallas and then Barkley within a few minutes.

Martinez brought on Nikica Jelavic and Osman for Steven Pienaar and James McCarthy, and then Steven Naismith for Lukaku, as they pushed for an equaliser.

It looked like their luck was out when Pieters again denied Naismith and Mirallas, but one minute into injury time Pennant brought down Osman at the second attempt and Baines sent Butland the wrong way.

"It was a difficult game. Once we went 1-0 down in the second half, it seemed we weren't going to find a little break we needed.

"I thought we showed enough threat to at least find a draw. I the penalty arrives late but we had a couple of shots that hit the crossbar. That first goal was going to be vital. I thought whoever scored first would win but we showed character and never-die-attitude and got the reward at the end.

"We see it as dropping two points. We knew Stoke had a good record at home. We knew it was going to be difficult. But given the circumstances, when you have a couple of shots cleared off the line, you feel it's not going to be your day so when you get an equaliser that late, you have to take it and move forward."

"We're disappointed. We put a huge effort in. We were good value for a 1-0 lead. I felt we coped really well with Everton. Four or five weeks ago we were beaten 4-0 by them. Today we more than matched them.

"It's a clear penalty. We made a mistake and it allowed them a way back. I thought we deserved three points. We played really well.

"Assaidi has been a real asset in the last few weeks. Teams are looking to double up on him.

"(In January) we'll see what's available. It's not easy. Nothing is in the off yet. Everyone is working hard, as are we to add to the squad to take us through to the end of the season."

For a gallery of images from Wednesday's Premier League games please go to the BBC Sport Facebook page.