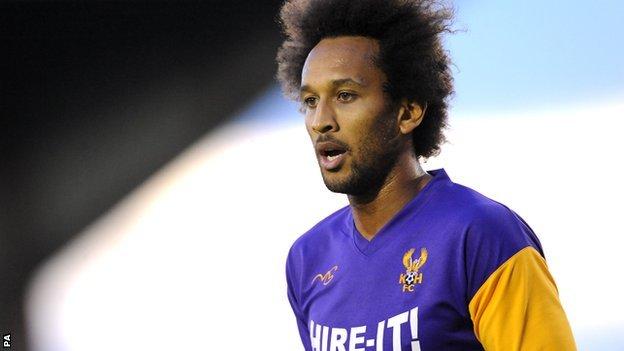 After a first half dominated by the Bulls, the home side went in front on 61 minutes when Josh O'Keefe looped home an angled header from 12 yards.

But Harriers took just four minutes to level through Gowling.

Captain Kyle Storer crossed from the right for centre-half Gowling to steal in at the far post and stoop to head in from six yards.

Financially-challenged Hereford extended their unbeaten home run to five games, but could have claimed all three points against a Harriers side labouring after their FA Cup adventure came to an end at Sunderland on Saturday.

Hereford should have been in front at half-time after a first 45 minutes in which Harriers failed to muster a shot at goal - and the Bulls missed a string of chances.

But the deadlock was finally broken when, after Michael Gash had headed Rod McDonald's cross clear, O'Keefe neatly steered his header back across goal and just inside the unmarked far post for his third goal of the season.

Gowling then levelled against his old club and, after visiting keeper Danny Lewis had saved from Artus and Rankine had blasted a chance over late on, Harriers hung on for a point.

"It wasn't the prettiest game, and a few of ours looked a bit leggy, but we've added a bit of steel to our side and it was our back five and the two in midfield that got us the result.

"Hereford have got a really good home record. This a difficult place to come. They turn you round and pin you in and you've got to be strong and win plenty of second balls.

"It's difficult to get the ball down and play. There's not a lot of space in the middle. In fact, about the 85th minute, I thought the ball was going to get stretchered off the way it was being treated.

"It's effective it was what they do, fair play to them. But we stood up to it. We've tried to put a bit of resilience into our and, over the course of the season, these are valuable points."