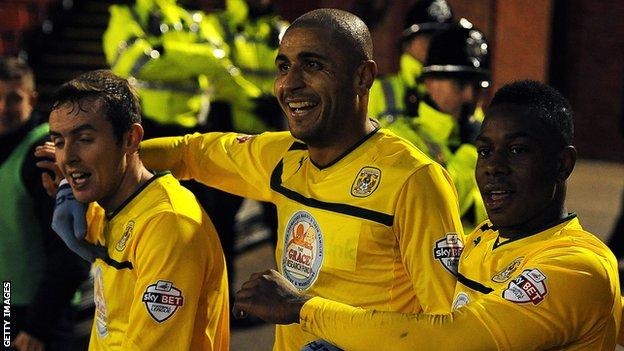 Late goals from Franck Moussa and Leon Clarke saw League One Coventry City come from behind to win at Barnsley.

Jim O'Brien put the Championship side in front as he lobbed Joe Murphy and Tomasz Cywka almost doubled the lead with a curling shot that hit the post.

Moussa levelled as he raced through and fired into the top of the net.

And the in-form Clarke put the Sky Blues into the fourth round with just a couple of minutes left as he burst into the box and powered past Luke Steele.

Despite a lacklustre first-half display, the visitors had the first shot on goal as Clarke's volley was well saved by Steele.

After O'Brien opened the scoring following a long ball from Jean-Yves M'voto, Coventry keeper Murphy was soon called into action as he kept out Cywka's 30-yard free-kick with a diving save.

Clarke almost equalised midway through the second half when his shot clipped the bar after Steele failed to gather the ball from a corner as Coventry began to take control of the game.

Belgian midfielder Moussa finally made the pressure count with 12 minutes to go when he latched on to a ball over the top, outpaced a couple of defenders and finished in the top corner.

But Clarke had the final say as he fired his 18th goal of the season into the bottom corner.

"The most important thing for us was that we started believing in ourselves.

"It took us a little bit of time to settle into the game, but in the final 15 minutes of the first half and then in the second half we were terrific.

"We've been behind in the last four games and then go on to win three of them and draw one of them, and that shows the kind of spirit and mentality within the group at this moment in time.

"I am extremely proud of the way we're going about things; it's been a terrific Christmas period for us and the players have worked exceptionally hard.