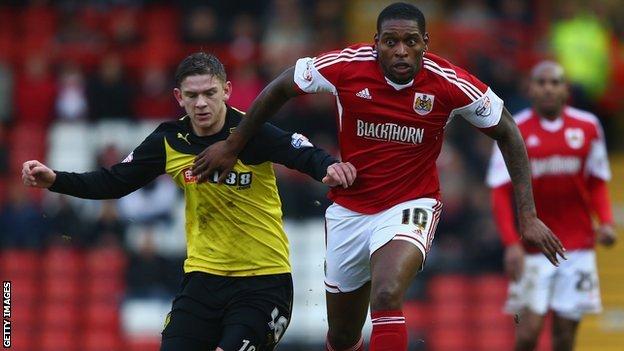 League One Bristol City fought back to earn an FA Cup third-round replay against Championship side Watford.

The visitors came closest to scoring before the break when Gabriele Angella clipped the bar, while Joe Bryan forced a smart save from Manuel Almunia.

But City's response was immediate, with Jay Emmanuel-Thomas's tap-in from close range setting up a replay.

The hosts almost won it in injury time but Almunia managed to tip away a goal-bound Wes Burns cross.

"I thought it was a good game today. I'm really pleased we showed good character going 1-0 down so late - it would have been easy for the boys to give in. But they didn't and they have a good spirit about them.

"They're a great club with really nice people there. They have a new manager in there now and so they'll be looking to climb the Championship table as well.

"So it was a tough game for our boys today, and I think we did really well."

"I thought it was a really tough game. Bristol City had their moments and we obviously had our moments.

"When we broke the deadlock everyone assumed we would go on and win the game but credit to Bristol City, they came straight at us from the kick off.

"Overall I think it was a fair result. We're in the hat and there are a lot of people who aren't, so we have to take the positives out of it."