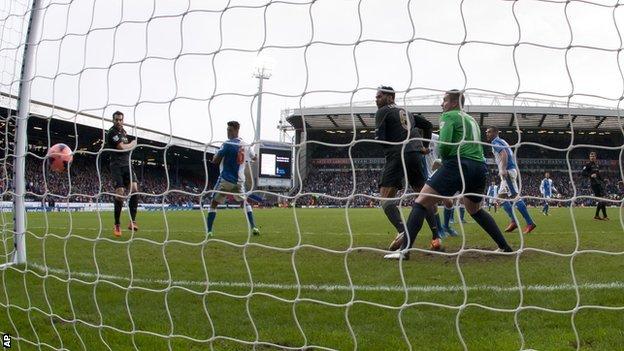 Manchester City survived a scare at Ewood Park as they hung on for a replay against Championship side Blackburn Rovers in a pulsating FA Cup clash.

Last year's beaten finalists looked on course to reach the fourth round when Alvaro Negredo fired them into the lead before half-time.

But Scott Dann deservedly levelled for Rovers and City had to play a nervous last nine minutes, including stoppage time, with 10 men after defender Dedryck Boyata was sent off for his second booking near the end.

A replay was probably not on the wish-list before kick-off for City boss Manuel Pellegrini, who already has a crowded fixture list in January that includes both legs of his side's Capital One Cup semi-final with West Ham.

But he will be grateful to still be in the draw for the next round after seeing a spirited Blackburn side threaten what would have been a huge upset.

Rovers were neat and tidy in possession from the start and looked dangerous down the flanks in the early stages, but their final ball into the box did not always punish some hesitant defending.

City were initially out of sorts going forward too but began to build some pressure around the half-hour mark and soon produced the game's first real opening.

Boyata did well to find David Silva with a pull-back from the right but the Spaniard made a mess of his finish, blazing his shot high over the bar.

If that chance was a hint that City could create a goal out of nothing, Negredo's opener proved it.

The Spanish striker struck on the stroke of half-time, turning in Edin Dzeko's header from Silva's cross.

Blackburn's frustration was shown when Rovers duo Grant Hanley and Chris Taylor were involved in a shoving row as the players walked off for the break.

But Rovers, who lie 10th in the Championship, continued to attack their more illustrious hosts after the break, and got their reward when Dann fired home in the 54th minute.

City were rattled and Blackburn, who caused one of the biggest shocks of last season's FA Cup when they knocked out Arsenal at the Emirates in the fifth round, clearly scented another upset here.

They fired a succession of balls into the area to test a jittery City defence, with Pantilimon looking an uncertain presence behind them.

City were still threatening at the other end, and Negredo should have done better with his header after former England keeper Paul Robinson, returning after a year out with illness, had kept out Dzeko's snap-shot.

Jesus Navas came off the bench to force Robinson into another diving save and City looked more likely to get a winner.

But Boyata's dismissal turned the last few minutes into a survival mission for the visitors, and Blackburn could have snatched a famous victory when Tom Cairney's shot whistled a few inches wide.

"It was an absolutely phenomenal effort from our lads playing against a world-class team and they restored some pride in the club today.

"We always knew it was going to be a very difficult challenge but the spirit that they have and the character they are developing... It's a young squad that is improving, but you could see the unity they have together.

"That has been important for us throughout the season. I have nothing but pride and praise for them.

"It would be wrong to single out individuals but on this occasion, and the fact that Paul has not played for so long, he made some crucial saves for us in the second half and his experience helped us massively."

"We were not lucky. It was a very close match and I think we had more clear options than Blackburn but we played against a very strong team who were at home.

"They had a lot of motivation and that is normal when you have a Championship team playing against a Premier League team.

"We were going to be travelling to Abu Dhabi and having a friendly match there, now we are going to play against Blackburn Rovers at home.

"What is better? It is impossible to know."