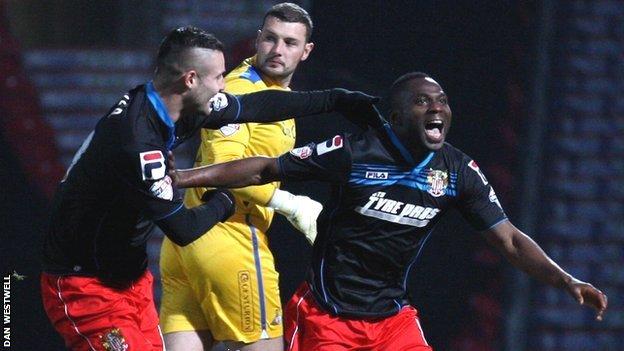 League One Stevenage secured their place in the FA Cup fourth round by knocking out Championship strugglers Doncaster Rovers.

Francois Zoko fired Boro ahead from inside the area after the break.

Peter Hartley then headed in from a corner to double the visitors' advantage before Harry Forrester pulled a goal back with a left-footed strike.

Darius Charles fired in from inside the box to make it 3-1 before Liam Wakefield's late consolation strike.

Stevenage's victory means Doncaster, who are 22nd in the Championship, have now failed to win since beating QPR in a league game on 30 November.

But Stevenage ended the first half on top, with Luke Freeman and Marcus Haber having chances to put the visitors ahead.

And four minutes after the restart Zoko slotted Graham Westley's side ahead after a mistake by Doncaster defender Paul Quinn.

But inside the final minute of normal time they were caught on the break as Charles added the visitors' third goal, converting Zoko's right-wing cross.

Wakefield found the net soon after but it was too late for Rovers to score again and force a replay.