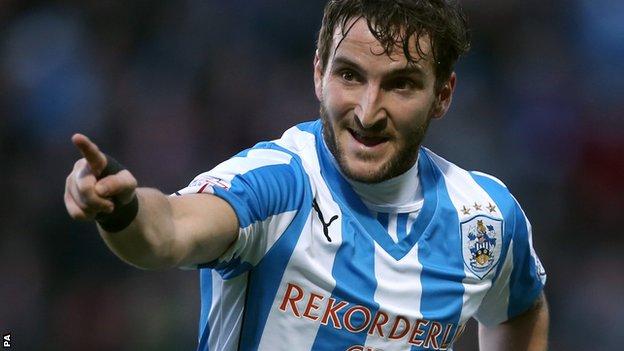 Championship side Huddersfield scored two late goals to see off non-league Grimsby in a thrilling match and secure a place in the FA Cup fourth round.

The Terriers levelled when Oliver Norwood's free-kick found the bottom corner but Craig Disley restored the hosts' lead with a close-range header.

Martin Paterson levelled things with a close-range strike before Aswad Thomas put through his own net.

Huddersfield, who at the start of play were 63 places above Grimsby in England's football pyramid, began brightly, dominating possession.

But against the run of play Joe Colbeck picked up the ball on the right hand side and his low drilled cross was met at the near post by Hannah who struck his ninth of the season to give Grimsby the lead.

The second period began much like the first with the Championship side seeing plenty of the ball.

Their possession was rewarded when Adam Hammill was fouled on the edge of the area and Norwood lifted the resulting free-kick over the wall and into the the bottom corner to equalise.

Grimsby regained the lead shortly after when good play from Andy Cook in the visitors' box saw his shot deflected up into the air and Disley rose to head the looping ball into the back of the net.

An upset looked on the cards but substitute Sean Scannell's fierce shot was only parried by Mariners keeper James McKeown and Paterson was on hand to fire in the rebound and level the tie.

With a replay looking likely, Scannell played in Duane Holmes and his cross was turned into his own net by Thomas to give Huddersfield a dramatic win and a place in the fourth round.

"I've walked in to the dressing-room after the game and the players are genuinely disappointed and rightly so. I think we more than deserved at least a replay but that's what happens. The game was wide open and we never settled.

"At 2-1 we had a couple of chances to make it 3-1, I still wouldn't have been comfortable on the sidelines but a two goal margin would have given us a little more breathing space.

"I thought it was a really good game and I have to say I thought Huddersfield came with a good attitude towards the game. They started off extremely well and the longer it went we frustrated and then got ourselves some opportunities and we made it into a real game. "