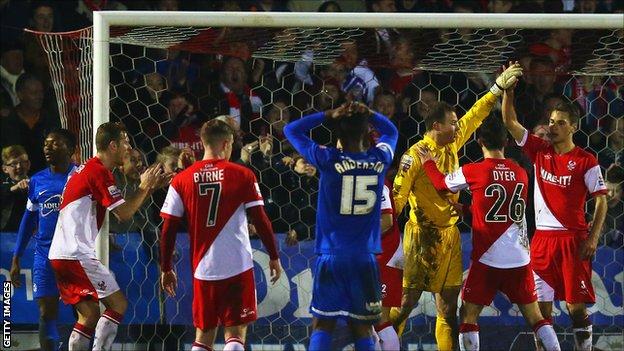 Non-league Kidderminster Harriers secured a place in the FA Cup fourth round draw by holding League One Peterborough United to a goalless draw.

Kidderminster survived an astonishing last-ditch scramble in which Posh hit the bar three times and Harriers cleared off the line.

But Harriers defender Josh Gowling had a shot charged down when he went close to winning the game in the dying seconds.

Harriers keeper Danny Lewis also had to go full length to deny Lee Tomlin before the break, while home full-back Vaughan should have done better after being played clean through by on-loan debutant Jack Dyer, only to fire over.

Harriers' first clean sheet since October, in front of a season's best crowd of 3,858, came just a week after suffering a Conference record 6-0 defeat at Luton.

The replay will be at London Road on Tuesday, 14 January.

"It was an exciting game considering that there were no goals and I'm just pleased to get another go down at Peterborough next week.

"We were under a lot of pressure in the second half and Danny Lewis made some good saves, The one at the end, when it ricocheted off the bar I think all our fans behind the goal helped head that one out.

"But we had some good chances. Lee Vaughan was through all on his own and went for the shot. One day they work for you, another day they don't.

"Having not been at our best of late, I was just pleased with the effort and commitment and showing that we can defend, putting our bodies on the line."