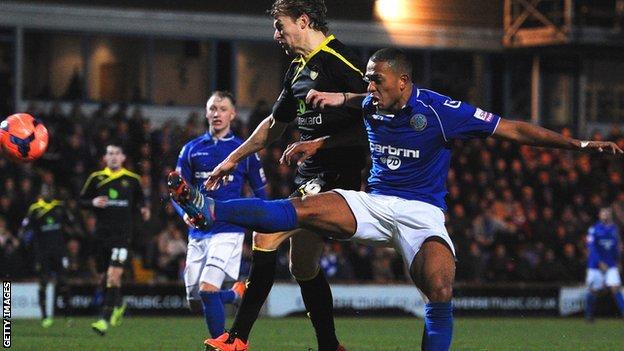 Joe Connor had a header cleared off the line for Town before Reda Johnson nodded the Championship side ahead.

Rhys Taylor made a string of fine saves for the hosts, denying Jose Semedo and Jeremy Helan either side of the break.

Chris Holroyd and Danny Whitaker both went close to levelling before Williams prodded home the equaliser.

Like Connor in the first half, Holroyd's header was cleared off the line by Liam Palmer.

Owls keeper Damian Martinez then saved well from a powerfully struck Whitaker effort from inside the box.

Macclesfield, the lowest ranked side in the third round, continued to pile forward in search of a lucrative leveller.

The Silkmen need £150,000 of investment to keep the club afloat and securing safe passage to the fourth round is worth more than £67,000.

Snatching an equaliser and holding on to force a replay at Hillsborough also guarantees a much needed financial boost.

Williams did enough to get a toe onto the end of a deep Paul Turnbull cross and steer the ball past Martinez.

"Second half we came out a bit more confident and created chances, Sheffield Wednesday didn't really threaten I didn't think.

"I'm not saying that we were fortunate not to win it but I'm just glad we got the draw and that's as much as we could of asked for or dreamed of.

"When your centre half breaks through to score the equalising goal then its not what you expect but that's the FA Cup and I thought he (Steve Williams) was tremendous today as most of them were."

"We started very well, got our noses in front, deserved to be leading I thought, and then we didn't build on that.

"The disappointing thing is in the last 10 minutes we probably looked like we could've lost the game.