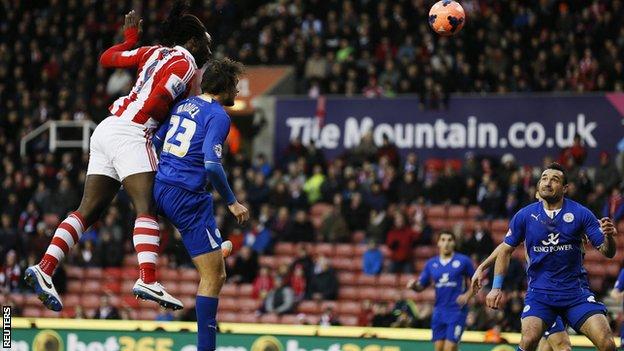 Kenwyne Jones's header and a stunning Charlie Adam strike sent Premier League Stoke into the FA Cup fourth round at the expense of Championship leaders Leicester.

Potters striker Jones headed the hosts in front from Oussama Assaidi's early cross for his fifth goal of the season.

Adam then found the net after the break from 25 yards with his left foot.

Substitute David Nugent headed in from Marcin Wasilewski's cross to give Leicester hope but Stoke held on.

The 2011 FA Cup finalists Stoke would have been wary of a potential upset against Leicester who came into the game on the back of four straight league wins.

But the Championship leaders were sloppy in the opening stages and needed Ignasi Miquel to clear an Adam shot off the line.

Stoke were in front in the 16th minute when Assaidi's cross was met by Jones at the back post and he guided it home past goalkeeper Kasper Schmeichel.

Anthony Knockaert volleyed over soon after for the visitors before Jeffrey Schlupp fired wide from a tight angle.

Adam's long-range strike in the 55th minute looked to have sealed the win for the hosts but the introduction of Nugent and Lloyd Dyer injected some life into the Foxes.

Nugent headed home in the 77th minute but despite some late pressure from Leicester, Stoke progressed.

Stoke City manager Mark Hughes: "I thought we showed a lot of control in the game. Obviously, you expect the opposition to come out flying and that was certainly the case in the first five, ten minutes.

"We had to get through that and once we'd done that I thought we showed real control and scored two good goals.

"We gave them a little bit of encouragement with the goal we conceded, so the last 10 minutes or so was a little bit frenetic and we had to defend well."

Leicester City manager Nigel Pearson: "We did okay in patches. But we didn't manage the ball as we are capable of.

"You've got to give them Stoke credit, but when you give ball away against Premier League sides, you work hard to get it back.

"We didn't quite play as we can, but we had our moments. We came with the intention of winning and made chances. We've shown again that those players that come in can do a good job."