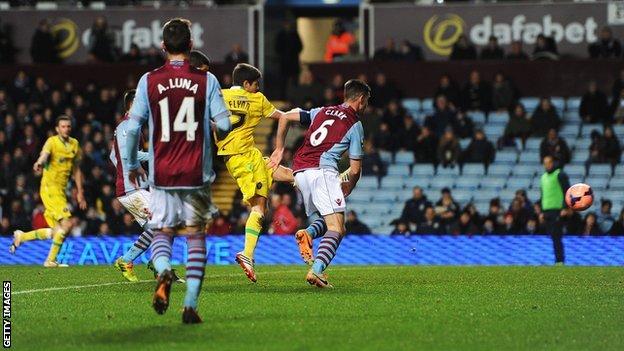 The Blades stunned the home side when they took the lead through a deflected Jamie Murphy strike.

"Sheffield United won the match on merit. They came with a disciplined game plan. Villa were pallid and uninspired."

However, Flynn cut inside from the right and unleashed a left-foot shot into the top corner for the winner.

Nigel Clough's side may only be one point above the League One relegation zone but they raised their game to embarrass their more illustrious opponents.

The home side left the field to a chorus of boos from their own fans and there is unlikely to be too much sympathy for the Midlands side following manager Paul Lambert's pre-match comments.

Lambert had caused controversy by saying Premier League managers could do without the FA Cup "if they were being honest", and it is now a competition he will not need to worry about this season.

Despite putting out a strong side, including first-team regulars Benteke, Andreas Weimann and Fabian Delph, Lambert's players soon found themselves behind.

A disciplined and organised United had comfortably held Villa at arm's length before catching out the Midlands side with their first meaningful attack.

Murphy, who had been recalled for Conor Coady, cut inside from the left and scored with a shot which took a deflection off Ciaran Clark on the way past goalkeeper Jed Steer.

Villa lacked urgency and purpose and their response was limited to long-range efforts which failed to test keeper George Long.

The home side belatedly awoke towards the end of the first half and Benteke should have scored when he latched on to an inviting Marc Albrighton cross only to fail to hit the target.

United took the scare as a cue to try to extend their lead and Flynn had a shot palmed wide by Steer just after the break as the visitors continued to frustrate the home side and Villa's agitated fans.

Blades keeper Long had to tip over an Albrighton cross, although it was the visitors who looked more like scoring.

Flynn was causing plenty of problems and Steer failed to gather another effort from him before Villa defender Matthew Lowton cleared the danger.

Villa had struggled to break down their stubborn visitors for most of the game, but equalised when a hopeful ball into the box ricocheted about before falling for Helenius to score.

The goal proved a false dawn for Lambert's side as United, who are 51 places below Villa, picked themselves up and scored a deserved winner through the livewire Flynn.