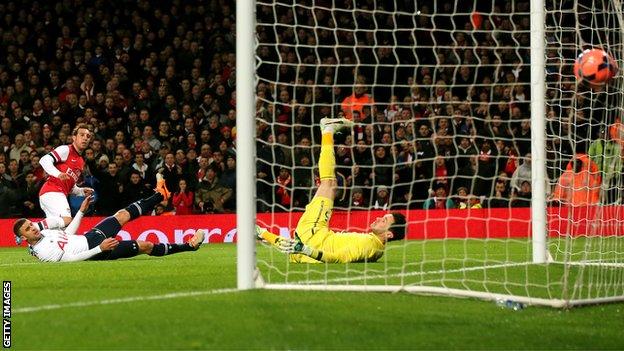 Arsenal emphasised their current superiority over Tottenham with a comfortable FA Cup third round victory at Emirates Stadium.

Arsene Wenger has set his sights on an extended FA Cup run as his side stand top of the Premier League table - and they were never in serious danger as they dominated this north London derby to move into the next round.

Santi Cazorla's powerful finish put the hosts ahead in the first half and Danny Rose's dreadful error allowed Tomas Rosicky to race half the length of the field to score just after the hour.

The only downside for Arsenal was the sight of Theo Walcott being carried off on a stretcher in the closing minutes after appearing to catch his studs in the turf as he raced back to make a defensive tackle.

In terms of imagination, invention and a little guile Arsenal had it in midfield, while Tottenham didn't have any. Arsenal are the deserved winners."

New Spurs boss Tim Sherwood was left disappointed as his players never reached the heights that saw them record an outstanding win at Manchester United on New Year's Day - and faced the taunts of Arsenal fans only too keen to remind him about his reported allegiance to the Gunners as a supporter.

This was another impressive show of strength from Arsenal as their season gathers momentum and the ground was awash with optimism and celebration at the final whistle.

The home side worked openings through midfield, where Spurs were light in numbers as Sherwood continued his bold ploy of playing two out-and-out strikers in Emmanuel Adebayor and Roberto Soldado.

Walcott's pace was a constant threat, twice forcing saves from Hugo Lloris and seeing another effort deflected over the top.

Youngster Serge Gnabry was also impressive and after firing narrowly over the top he was instrumental as the Gunners took a deserved lead after 31 minutes, laying a perfectly weighted pass into the path of Cazorla, who did not break stride before firing a first-time finish high past Lloris.

Arsenal made a change at half-time, with Per Mertesacker replacing Thomas Vermaelen - but Sherwood was happy to persist with his original line-up.

Arsenal have not lost in the third round of the FA Cup since 1996, a 1-0 defeat in a replay to Sheffield United.

It was almost rewarded when Adebayor found space on the turn in the penalty area only to produce a scuffed shot, much to the delight of Arsenal's fans as they taunted their former striker.

The hosts always looked the more dangerous side and Walcott could have doubled their lead as he evaded Michael Dawson and rounded Lloris but could only find the side-netting from a tight angle.

The second goal arrived just after the hour - and it came courtesy of a calamitous mistake from Spurs defender Rose, who hesitated in possession on the halfway line, allowing Rosicky to nick the ball off him before running on to lift a finish over Lloris with Kyle Walker in pursuit but unable to make up the ground.

Sherwood immediately made a change, sending on Nacer Chadli for Soldado, but it was too late to shift the momentum of the match back in the visitors' favour.

Spurs' manager cut an increasingly frustrated figure in his technical area, especially after penalty appeals were rejected when Nacho Monreal collided with Walker and the ball struck Cazorla's hand in the area.

Arsenal were reduced to 10 men when Walcott was carried off with them having made all three substitutions - but Tottenham were in no shape to take advantage and this was an emphatic win for Wenger's side.

"The game was played at a good pace and I think we controlled quite well both sides of it, the defensive and the offensive.

"We always looked to have a good discipline and to be tight at the back.

"Every time, when our game is based on movement and quick, sharp passing, we looked dangerous."

"I am disappointed with the result, but we didn't disgrace ourselves.

"We showed we belong on the same field and in the same company as Arsenal.

"It has been six games in 17 days for us and we probably have the smallest squad in the league with the amount of injuries we have had.

"We were fatigued. A little bit of sharpness was missing but it could have gone either way.

"They showed great character and I am proud of them."