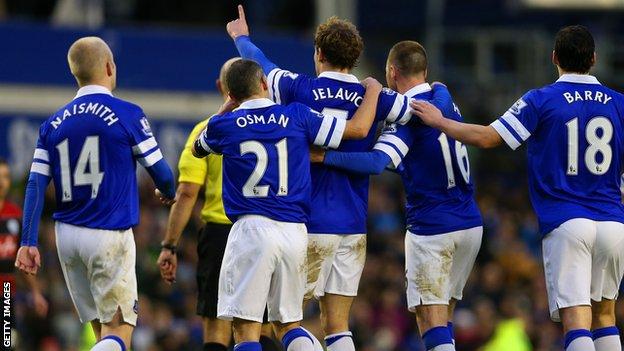 Nikica Jelavic scored twice and missed a penalty on his first start since September as Everton eased past Queens Park Rangers in the FA Cup.

The Croatia striker, 28, drilled in his first goal since March from 22 yards after Ross Barkley had curled the five-time FA Cup winners into the lead.

Bryan Oviedo set up Jelavic's second and was then fouled by Julio Cesar, but Jelavic hit the bar with the spot-kick.

Nikica Jelavic scored 10 goals in his first 16 games for the club, but his brace against QPR was the first time he had hit the net since March 2013.

Everton manager Roberto Martinez oversaw the Blues' demise in last year's competition, masterminding a 3-0 quarter-final win with Wigan at Goodison Park, on their way to lifting the trophy.

The Spaniard, who is winning a cult following amongst Evertonians on Merseyside, talked up the competition's' "unique" nature before the game, stating "everyone is entitled to chase the dream".

Everton's fans will undoubtedly do just that, after Queens Park Rangers never threatened to blight their first hopeful step towards Wembley and a first piece of silverware since their 1995 FA Cup win.

Rangers boss Harry Redknapp, an FA Cup winner with Portsmouth in 2008, tipped Martinez as a possible England manager in the build-up and will now focus on winning promotion back to the Premier League.

The fact his side, boasting 10 players with Premier League experience, failed to muster a shot on target, will however likely irk the 66-year-old.

Gary O'Neil, 30, spurned the visitors' golden opening early on when he failed to connect with a cross, and his lapse was punished when Barkley was crisply found in the area by Oviedo to whip the ball past Cesar for his first FA Cup goal.

Barkley, 20, was influential, as he has been consistently for the Blues this season. He had already had an effort saved by Cesar, only for Osman to lift the follow up over the bar.

Jelavic, who scored nine times in his first full season at Goodison last year, ruthlessly added the second when he pounced on a Karl Henry error in midfield to fire in clinically from distance.

It was his first goal since March and effectively ended the contest as Everton cruised into round four in a one-sided second period.

Oviedo showcased his quality as Leighton Baines' understudy with a weaving run to set Jelavic up for his second from three yards, before Cesar bundled the Costa Rican over in the box.

The stage was set for Jelavic to underline any attempt to unseat Romelu Lukaku as Martinez's first-choice striker, but his chipped penalty came back off the bar.

The miss mattered little, and Coleman profited from a strong Barkley run to fire his sixth goal of the season and ensure Everton's comfortable progression.

"[Jelavic] was very, very good. He is a bit frustrated that he couldn't get the hat-trick - I did feel his performance deserved it.

"I don't want to sell him - I don't want to lose him now, but I understand it is a key moment for him. Put it this way - if the World Cup was not in the summer, this situation would never be in place.

"I thought he looked very sharp and that his movement was terrific in the box."

"It was a disappointing afternoon, we were well beaten today. We were beat by a far better team. I thought Everton were excellent.

"Even though they made lots of changes, they were strong all over and made life very difficult for us.

"They've got some real quality throughout their squad and it really showed today.

"We struggled to live with them at times. Their movement, their passing, their attacking play - it was top class."

Shots on Target
Home12
Away0