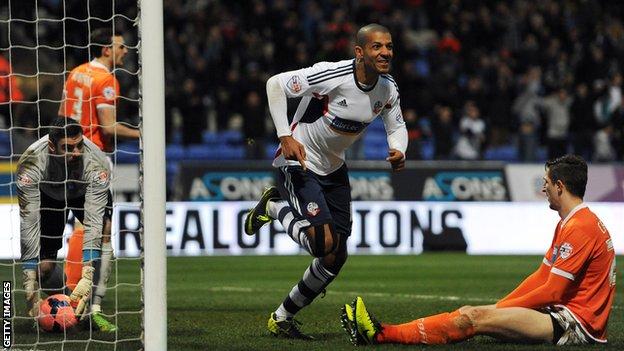 Bolton striker Jermaine Beckford continued his remarkable FA Cup scoring record as Blackpool failed to make it past the third round for the sixth time in seven seasons.

But Beckford made it 17 goals in 20 outings in the competition when he tapped home Ngog's low cross.

The 30-year-old former Everton and Leeds forward has scored in the third round in each of the last five seasons.

Blackpool boss Paul Ince, a two-time FA Cup winner with Manchester United, has now seen his side lose seven times in the last eight games and they fell behind to their Championship rivals in the 10th minute when Ngog unleashed a tremendous strike into the top corner.

Beckford and Alex Baptiste wasted further chances to extend Bolton's lead before the visitors equalised just before the interval, Barkhuizen cutting in from the right before finishing high into the net.

Ricardo Fuller looked to be in an off-side position but the goal was given after the referee over-ruled one of his assistants, who had raised his flag.

Blackpool's Angel Martinez was denied a goal by a fine Neil Danns block before Beckford netted for the hosts in the 51st minute after Ngog had sprung the off-side trap to tee up his team-mate.