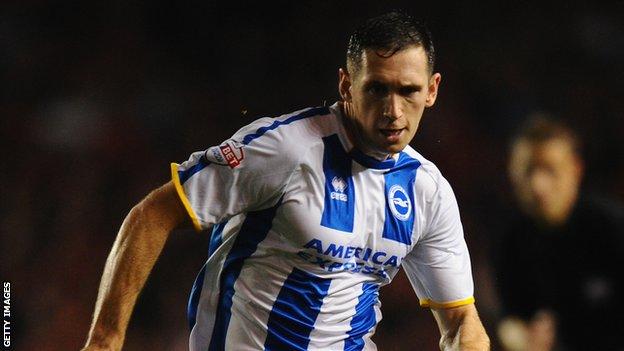 Keith Andrews, Solomon March and Ashley Barnes all hit the crossbar for a dominant home side in the first half.

Pearce had claims for a penalty rejected after the interval, while Kemy Agustien went close for Brighton.

Both sides played out an uninspiring 0-0 draw when they met in the Championship in September, but Brighton started with real purpose this time at Amex Stadium.

Andrews was at the centre of the early action, forcing Royals goalkeeper Adam Federici into a brilliant save from a deflected shot before hitting the bar after a driving run into the penalty area.

The Reading crossbar was struck twice more in the same attack soon after, first via the impressive Federici after a 20-yard March shot, and then from Barnes's headed rebound.

Brighton continued to be the stronger side and got the goal their pressure deserved when midfielder Crofts' shot from outside the area took a huge deflection off Pearce.

The defender was involved again at the start of the second half as Reading appealed for a penalty after his header from a corner appeared to strike an arm.

The hosts were soon back in control, and Australia international Federici produced another superb stop to keep out midfielder Agustien's effort from the left.

Reading then went close to forcing an unlikely equaliser late on when striker Adam Le Fondre headed over when unmarked.

"The first half was as dominant as we've been all season and we must have hit the post and bar three or four times. We had chances that we created and we were fluent. It was very pleasing.

"I want to make a special mention to Adam Chicksen and Solly March because it's been tough on them, they've been training hard and showing great attitude.

"This is a first-team squad, a Championship squad and we know we are proud of the squad and we make changes not to weaken the team. We want to make sure that the to prepare well for the next five games."

"[On links to the West Brom manager's job] West Brom don't have a manager but all my focus is to try and improve Reading. All the energy and focus is to us.

"I wanted a good cup run but unfortunately a deflected goal has done us today.

"We've got a fantastic board and the chairman will do everything that is right for the club. We've got an opportunity to regroup and maybe get one or two in because our focus is to get promoted."