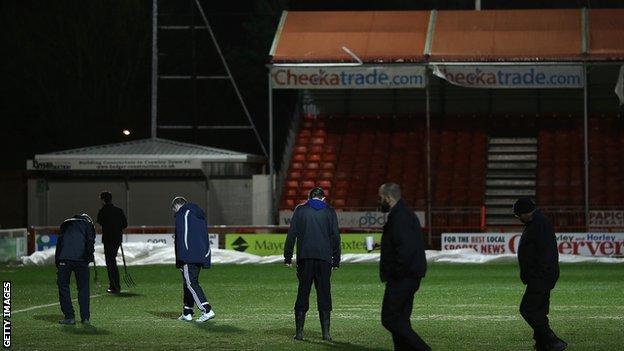 Crawley had their fifth successive match postponed after Tuesday's visit from Tranmere was called off because of a waterlogged pitch.

The Red Devils have only played three games in 2014 and none yet in February.

The match was postponed about an hour and a quarter before the kick-off time with referee James Linington concerned about player safety in certain areas.

He could have delayed the kick-off for an hour but it was decided work on the pitch would not be completed in time.

Crawley offered to play the match on Wednesday night but Tranmere, who suspended manager Ronnie Moore on Monday, "politely declined" the offer, according to the West Sussex club's website.

Temporary Rovers manager John McMahon had no complaints and told his club's site: "When you go on to the pitch it's obviously the right decision and there's nothing we can do about it.

"I think there are four or five poor areas. The groundsman to his credit has worked on them but there was no way we could play on that tonight."

Crawley have not played since the 2-2 draw at Rotherham on 25 January.

They are one point above the League One relegation zone but have at least three games in hand on every side in the division.

They have played six matches fewer than Tranmere, who are one point above them in the table, and have seven games in hand on strugglers Notts County and Bristol City.