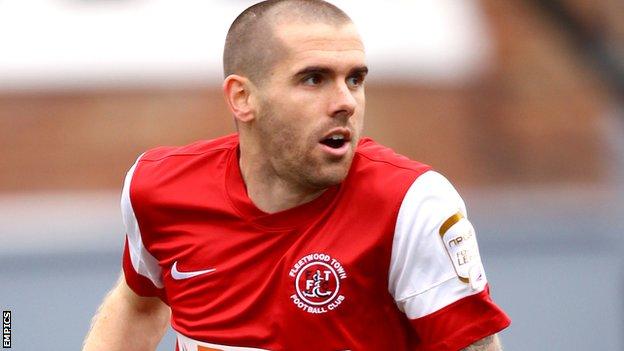 Both sides wasted decent chances, but the hosts created the better openings after Sam Winnall's glancing first-half header from Gary McSheffrey's driven cross put them ahead.

Winnall came closest of all, hitting the bar with a header.

But Gillespie snatched a draw when he headed in Michael Smith's cross.

Scunthorpe are now two points behind leaders Chesterfield, who won 4-1 at Cheltenham.

"I think you're always disappointed to concede a late goal - we've gone for the second goal and we've probably got too many bodies in the box and we need to manage that last period better.

"We had enough chances to win the game, we had two or three penalty appeals turned down, we hit the bar, they're a good outfit but on the balance of play in both boxes, we've created a lot more than they have.

"We've got to be so careful at this club now with the expectations, we're 17 games unbeaten, but you've got to try and embrace this time.

"We were disappointed with our quality in the first period, and even in the second half we didn't have enough of the ball in the top end of the pitch.

"But it was an excellent goal we finished with, after good play, so I'm not cribbing about something we can't do.

"We've come here and been very positive. We stood strong and decided to go and attack.

"We've come out to look for a point or three and we've got one. I'm really pleased with that."