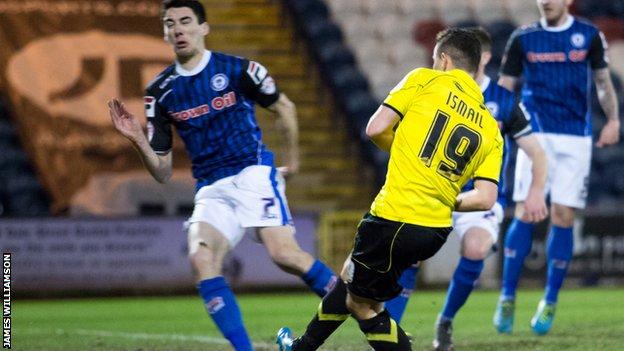 Rochdale came from behind to claim a draw against Burton but missed the chance to move into the automatic promotion spots in League Two.

Zeli Ismail reacted quickest inside the box to net the opening goal for the visitors in the first half.

Keith Hill's side stay in fourth place, behind Oxford on goal difference.

Rochdale have never beaten Burton in six attempts in the Football League. This was the first time they gained a point against the opposition, having lost all five previous meetings.

Albion could themselves have closed the gap on the top three, but stay in sixth.

Striker Scott Hogan should have given the home side the lead early on, showing a good burst of pace before forcing a save from Lainton.

But it was the visitors who went ahead after Ian Sharps' header was saved and the ball fell to Ismail, who kept his composure to slot home from close range.

Burton had control in the first 10 minutes of the second half, but were unable to carve out any clear-cut chances and saw their opponents equalise.

Donnelly struck a shot which looped off a defender and into the air and having had an assured first half, Lainton missed the ball while trying to punch it away and saw it fall over the line.

"We knew what to expect from the opposition because they've done it all season. It was obvious the way they were going to play because they play like that at home - 1-0, 1-0, 1-0.

"We just had to move the ball quicker in the first half and we didn't, and I thought that was it. In the second half, we started playing a lot better and started creating space between the back four and the midfield.

"It's a point gained. It's a massive point against one of our rivals."

"I would've taken that before the match. Rochdale have probably got the best home record in the division; I think they've won 11 games at home, which is a terrific record, and I felt our game plan worked really well.

"We got our goal, but after we got it, we didn't need to go and score again, particularly as they hadn't caused us too many problems at that point.

"When we came out for the second half, it was important to remember the first half had been just that, 45 minutes, we'd worked very hard, but we needed to do it again.

"To be honest their goal came from a mistake. Rob [Lainton] felt there'd been an arm on him, but it won't be the last one we'll see a goalkeeper make.