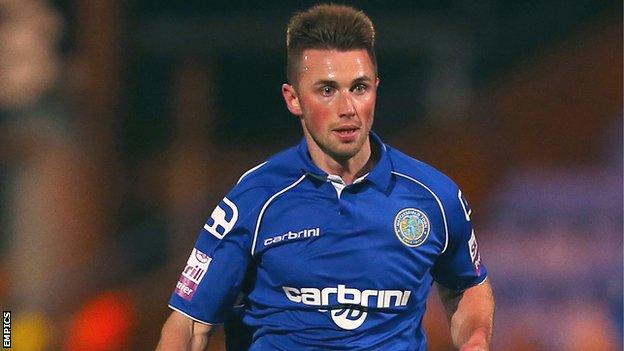 Macclesfield boosted hopes of making the Conference Premier play-offs as they came from behind to beat Chester.

Peter Winn flicked on for Scott Boden to head in three minutes later, before Steve Williams nodded in Winn's cross for the home side's 2-1 half-time lead.

Rooney's cross then should have brought an equaliser a minute later but Chester's five-goal top scorer Seddon ballooned over the bar from two yards.

While John Askey's Silkmen move to within six points of the play-offs, a third straight defeat for Steve Burr's City leaves them still just a point above 21st-placed Tamworth, who now have three games in hand.

Chester twice had the ball in the Macclesfield net, but top scorer Seddon and defender Paul Linwood both had them lucklessly ruled out for offside.

"When a defender makes a run in behind the back four and gets on the end of it, you don't expect to see the linesman's flag go up. As for the other offside decision that went against us, I'd need to look at the DVD.

"But that's just the way things go sometimes. I was more disappointed at the ease with which we allowed Macclesfield to score from three headers.

"I'm pleased that we created plenty of chances compared to Saturday. But we can't keep giving goals away like we have been doing.

"The players have got to start helping themselves. They are honest enough, but they were naive. To go in front and then concede two goals in the way we did was pretty embarrassing."