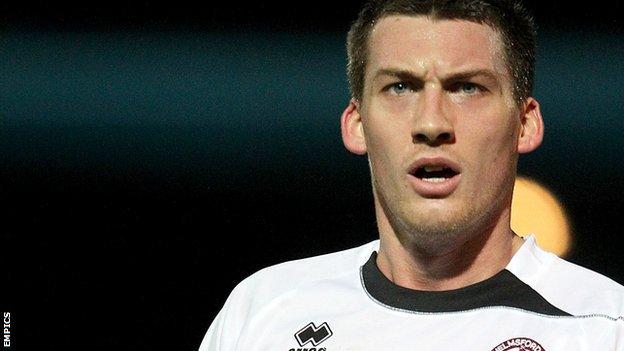 Michael Gash bundled home from close range but the closest Harriers came to an equaliser was when he hit the bar.

Dartford's last league win was a 4-3 victory against Hyde on 19 October. They have picked up just one point in 12 matches since then.

With one eye seemingly on this Saturday's FA Cup fourth-round tie at Sunderland, Harriers could have been four down at the break against the relegation-threatened Darts.

After Gash had turned in Lee Vaughan's cross to finally get Harriers on the scoresheet with his 11th goal of the season, he then powered an acrobatic right-foot volley against the bar.

But, despite Jim Stevenson's speculative 35-yard lob dropping just over, it was the 14 soaking wet visiting fans on the away terrace who went home happy after their side's first league victory since beating Hyde on 19 October.

In their first game since the six-figure departure of Joe Lolley to Huddersfield Town, to add to the Harriers' frustration, skipper Kyle Storer played through a second-half ankle injury and could be a doubt for Saturday's Cup tie at the Stadium of Light.

Both new signings Adrian Cieslewicz and Santiago Aloi made their debut as second-half substitutes for Harriers, who remain sixth, a point outside the Conference Premier play-off zone.

"I've seen it so many times. If you take your eye off the ball things like that can happen. Everyone's disappointed as we know we're better than that.

"Once we got the boys in at half-time and had a few words, I thought we we had a chance, and could have nicked something.

"I was pleased with the way we came back second half and got on the front foot. Another day something might have dropped for us.

"It's going to be a massive day for us on Saturday and I'm sure we'll do ourselves justice, but this was one that got away from us."

"In the first half, I thought we played really well. It could have been three or four.

"We broke up Kidderminster's attacking play, broke on the counter attack and it worked for us today. I'm absolutely delighted for the players and supporters.

"It's a massive lift. We've been through a devastating run of results. I thought we thoroughly deserved to win.

"It's never ending and it's ruthless but we'll enjoy nights like tonight. I don't think we're a poor side but hopefully we can build on tonight's performance."