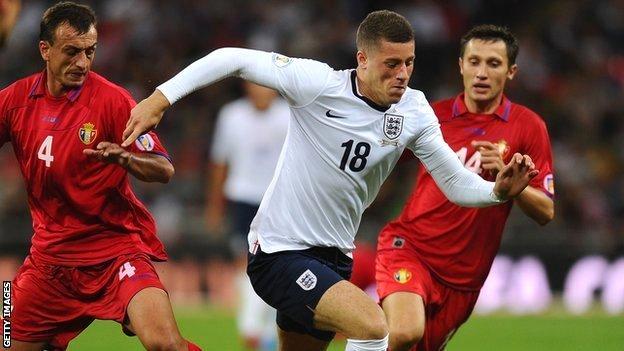 England manager Roy Hodgson says the door remains open for young players to force their way into his squad for next summer's World Cup finals in Brazil.

Among those identified by Hodgson include Everton's Ross Barkley and West Ham's Ravel Morrison, both aged 20.

"These two must realise we do have great faith in them and enormous admiration for their talent," Hodgson told BBC Radio 5 live's Sportsweek.

But he warned they will have to perform consistently well to be selected.

Midfielder Barkley, who joined Everton as an 11-year-old, made his England debut in the 4-0 World Cup qualifying win over Moldova in September.

His displays have drawn comparisons to Italia 90 and Euro 96 star Paul Gascoigne, while Match of the Day presenter and ex-England striker Gary Lineker recently tweeted that Barkley was a "prodigious talent".

Former Manchester United midfielder Morrison, who has been capped from Under-16 to Under-21 level, has also been widely praised this season.

Hodgson said: "There is no problem with a lack of experience. He has the quality, but he's going to find there is stiff competition from others, including Ross Barkley.

"We think they will be exceptional players, but they have got to perform week-in and week-out, and make sure they are on that team sheet.

"If they can keep more experienced players out of the team then, come May, their names will be in serious discussion."

Hodgson has also given hope to other young talent that there is still time for them to make an impression.

Liverpool winger Raheem Sterling, 19, made his full England debut in a 4-2 defeat by Sweden in 2012, a match in which he was replaced by Manchester United's 21-year-old forward Wilfried Zaha, who was also making his debut.

"You cannot ignore Raheem Sterling, who I saw playing brilliantly for Liverpool the other day, and [winger] Nathan Redmond of Norwich," said Hodgson. "And you cannot forget Wilfried Zaha, who a few months ago was on everyone's lips.

"But you've got to be careful with names of young players who suddenly burst on the scene.

"This time last year Wilfried was suggested as a shoe-in for the squad, but he's been usurped by Ravel Morrison and Ross Barkley, and, who knows, their places might be usurped."