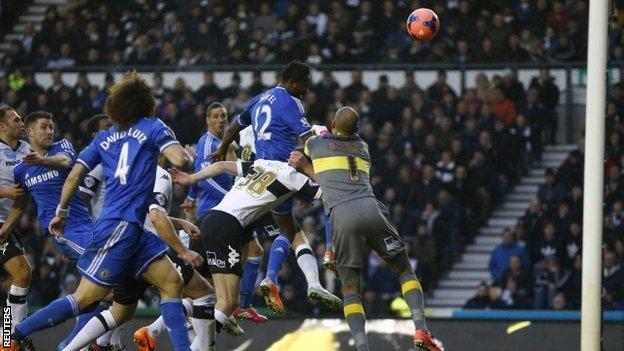 John Mikel Obi and Oscar scored second-half goals for Chelsea to set up an FA Cup fourth round tie at home to Stoke and knock a resurgent Championship side Derby out of the competition.

Mikel headed in the opener from Willian's cross before Oscar sealed a comfortable win with a bending shot.

Ramires then hit the bar while Chris Martin's late strike was the only Derby shot to test goalkeeper Mark Schwarzer.

The Brazilian was booked for a second-half dive in the penalty area.

Blues manager Jose Mourinho admitted Oscar deserved to get a yellow card for diving in the 3-0 win at Southampton on Wednesday and now faces more questions after Ramires appeared to tumble needlessly in the penalty area.

Chelsea have won their last 16 FA Cup third round ties with the last time they exited at this stage in 1998 against Manchester United.

That apart, it proved an enjoyable afternoon for Mourinho who said pre match he would play his strongest possible team and, despite making six changes from the side who beat Southampton in the Premier League last time out, there could be few complaints about the strength of his selection.

Derby came into the game revitalised under the management of former England boss Steve McClaren, winning 10 of their 15 games under him - including eight victories from their last 10 matches - to lift them into fourth in the Championship.

And despite challenging for Premier League promotion and facing leaders Leicester on Friday, McClaren's strong team selection made his intentions clear in a competition that has seen several managers from the top flight and Championship make a handful of changes.

But, on the back of three straight league wins, Mourinho's men were quick to stamp their control on the proceedings as they dominated possession early on, keen to avoid becoming the latest victim of an FA Cup giant killing act.

For all their dominance, it was the hosts who went closest to taking the lead when Craig Forsyth's low left-wing cross was inches away from the lunging Jamie Ward.

Chelsea, while looking comfortable defensively, were being largely restricted to long-range efforts, with Brazil midfielder Ramires shooting inches wide from 20 yards before his compatriot Oscar curled a free kick just past the post.

The visitors, who lacked real tempo for the large part, almost made the breakthrough in the final seconds of the half as Ramires twisted and turned in the area before seeing a shot deflected onto the post.

Derby's 18-year-old midfielder Will Hughes has been linked with a move to a Premier League club this month but he failed to make much of an impact as a well-organised Rams spent much of the first 45 minutes in their own half.

After the break, Mourinho introduced the attacking talents of Eden Hazard and Fernando Torres, although midfielder Juan Mata was left on the bench, and the deadlock was finally broken as the blues capitalised on one of the many free-kicks they were awarded.

Willian's wicked delivery from the left was flicked in by the head of Mikel for his fourth goal for the club, three of which have come in the FA Cup.

Chelsea made the game safe just four minutes later when Oscar got the ball to feet inside the penalty area and sent a swerving shot beyond goalkeeper Lee Grant.

Torres was then denied by Grant late on and Ramires saw a dipping shot hit the bar, before Martin's low shot was kept out by an otherwise redundant Chelsea goalkeeper Schwarzer.