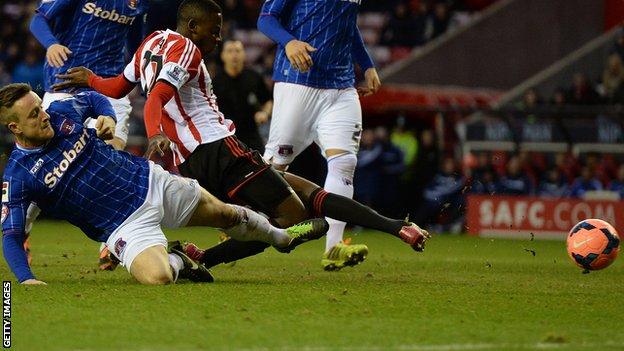 After an even opening, winger Adam Johnson swung in an excellent first-half free-kick to put the hosts ahead.

The League One side held their own and levelled soon after when Matty Robson hammered in off the crossbar.

Sean O'Hanlon sliced into his own net after the break and Ba slid home a Jozy Altidore lay off to seal the win.

The two teams met at the same stage of the FA Cup in 1995, with a 1-1 draw in Sunderland being followed by a 3-1 win for the Black Cats in Carlisle

Sunderland sit bottom of the Premier League but faced opponents who were beaten 2-1 by Crewe on New Year's Day, in a result which saw Carlisle fall to 16th in the League One table.

There was no sign of the sizeable gap between them in the early stages, as boss Graham Kavanagh saw his side impress upon his return to the club he won the Championship with in 2007 as a player.

Sunderland finally showed some of their superior class when the lively Johnson played striker Altidore clean-through with a smart pass.

The United States international has struggled for goals since his £6.5m summer move and this lack of confidence was evident as his weak shot was saved by Greg Fleming.

Sunderland's superior quality finally told when Johnson curled a superb free-kick into the top corner past the half-hour mark for his third strike of the season.

Only Fulham have conceded more top-flight goals this term than Gus Poyet's side though, and the visitors got the equaliser their play deserved as the Sunderland defence failed to deal with a David Amoo cross and Robson fired in.

Carlisle offered a gift of their own at the start of the second half as the hosts went ahead in fortuitous circumstances as the hapless O'Hanlon deflected Johnson's volleyed-centre into his own goal.

Poyet then gave youngster Duncan Watmore his first-team bow, and was almost immediately rewarded with a goal as the ex-Altrincham striker forced a good stop from Fleming after a neat one-two with Altidore.

The American fluffed a pair of good late chances to get his third goal of the season, but fed the on-rushing Ba to seal a fourth-round tie against Peterborough or Kidderminster.

Sunderland manager Gus Poyet said: "We are going to become a cup team. It was a professional performance today. We needed to do the job.

"It's never easy. You need to cope with a few situations and a few shots, but in the end you need to be better, so job done."

Carlisle boss Graham Kavanagh said: "It's so exciting for a club like ourselves to come to a stadium as big as this with a fan-base as big as it is.

"The romance of the cup has always been, and will always be, fantastic - I hope we don't lose that."