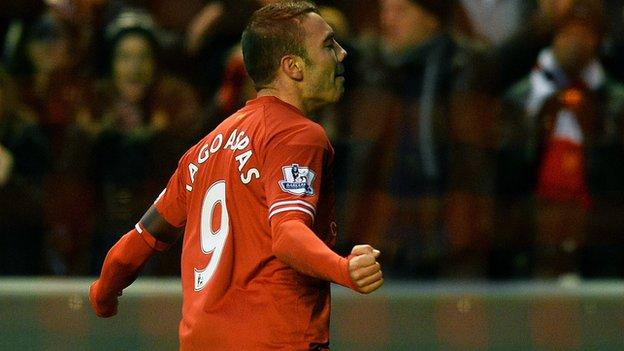 Iago Aspas scored his first Liverpool goal as the Reds overcame a stubborn Oldham in their FA Cup third round tie.

The home side struggled until Aspas hooked in a shot from Raheem Sterling's cross before the Spaniard also hit the post with a header.

But Liverpool sealed the win with an own goal after Sterling's shot went in off James Tarkowski.

"Oldham can leave Anfield with their heads held high. They did well for large parts of the game. One or two Liverpool players didn't take that opportunity to impress and manager Brendan Rodgers will store that in memory banks."

The Anfield side were forced to play the final nine minutes with 10 men after losing Daniel Agger to an injury after already making all three substitutions.

However, the Reds saw out the game to book a fourth round tie with either Bournemouth or Burton and avenge last season's FA Cup defeat by Oldham.

The Latics are battling to avoid relegation from League One but they made Liverpool, who sit fourth in the Premier League, work hard for their win.

Oldham skipper Korey Smith was booked in the first minute for a crunching tackle on opposing number Steven Gerrard and his challenge set the tone for a determined display from his side.

Liverpool lacked urgency in the first half and struggled to find any fluency to their passing.

Reds manager Brendan Rodgers reacted by bringing on Philippe Coutinho and Lucas Leiva for Luis Alberto and Victor Moses at the break - and the move had the desired effect as the home side started to exert more pressure, with Gerrard heading a Coutinho corner just high.

They broke the deadlock when Sterling dinked in a cross which bounced to around hip high and Aspas steered in a shot.

The striker almost added a second shortly afterwards when he headed another Sterling cross against the woodwork.

The visitors gathered themselves and Danny Philliskirk sent a strike narrowly high before the striker thought he might have had a penalty after being pushed.

Petrasso then left Agger and Kolo Toure trailing before having a well-struck shot from the edge of the box saved by Jones.

Oldham's efforts to get an equaliser left them vulnerable at the back and they paid the price when Liverpool gave themselves the cushion of a second goal.

Coutinho latched on to an Aspas cross and had a shot blocked but the ball fell to Sterling, whose effort was going well wide before deflecting in off Tarkowski.

"Everybody's an international [at Liverpool] and we're in league one for a reason, but I thought they went out there and showed character and they were bold on the ball, they worked their socks off, they put tackles in and put their bodies on the line and were actually quite unfortunate with the goals.

"The atmosphere was electric and it's great for the group because they're only going to grow from that. We tried, we worked really hard and I think the fans can go home appreciating that although our league position is looking a bit low at the moment, we've got players back fit now and we're hoping for a big 2014.

"Every man can go home, look in the mirror and say 'I really showed what I was about today'."