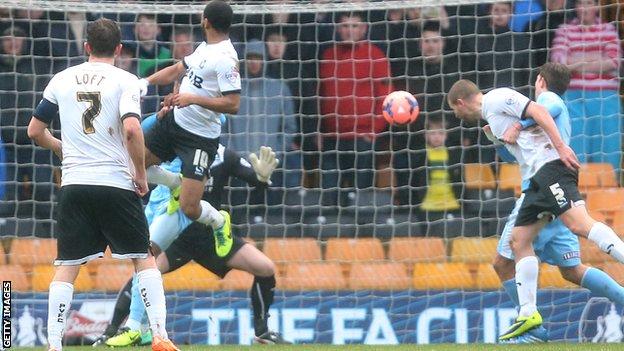 Plymouth Argyle fought back from two goals down to secure an FA Cup third-round replay with Port Vale.

Against the run of play, League One Vale opened the scoring as Gavin Tomlin glanced in a testing Jennison Myrie-Williams free-kick.

Their lead was doubled before the break when Tom Pope nodded home.

Vale's League Two opponents got a lifeline as Reuben Reid converted from close range and went level as Ben Purrington chipped in over the keeper.

Nice to meet you

Argyle started the brighter, but fell behind when Tomlin was left unmarked in the box to convert. The visitors continued to push forward and had their demands for a penalty turned down when Conor Hourihane's free-kick appeared to strike an arm.

Again, Argyle were punished for not converting their chances when Pope connected with a cross from captain Doug Loft to make it 2-0.

The Pilgrims had only been beaten once in their last eight games in all competitions, and this resolve was on display after the interval. Reid reduced the arrears when he side-footed home after a cut back from Lewis Alessandra.

The deserved leveller came with 15 minutes remaining, with Alessandra the creator again as he fed rampaging left-back Purrington to secure a replay.