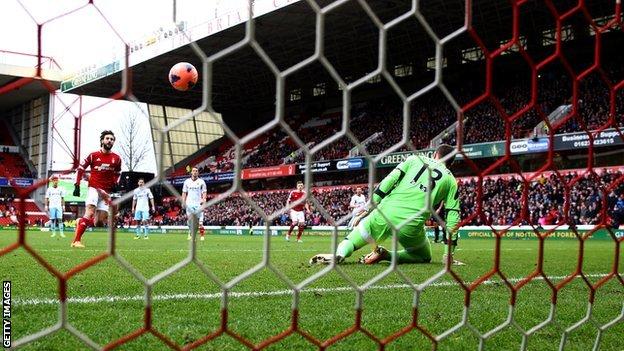 Jamie Paterson scored a hat-trick as Nottingham Forest added to West Ham's woes by knocking the struggling Premier League side out of the FA Cup.

Hammers boss Sam Allardyce fielded a youthful side and the visitors went behind to a Djamel Abdoun penalty after George Moncur tripped Paterson.

Forest were dominant, and Paterson angled in the second before slotting in from eight yards to make it 3-0.

"We looked at the sides pre-match and thought it looked like it could be an uneven match-up. That was exactly the way it panned out.

"West Ham have gone out of this competition with a whimper, never at any stage looking like they were going to give Forest a problem on the day. Big Sam is now under big pressure."

Whether Forest's win counts as an upset is debatable considering the team selected by Allardyce, but the comprehensive manner of the defeat will only add to the pressure on the West Ham boss.

Allardyce said before the game that the FA Cup fell behind top-flight survival and the Capital One Cup semi-final against Manchester City in his priorities, and also bemoaned the injury problems he is having to contend with.

And Allardyce's decision to put the emphasis on youth soon backfired.

Moncur's over-exuberance resulted in the midfielder making a rash challenge on Paterson, and Abdoun nonchalantly chipped in the resulting penalty.

Ravel Morrison had a dipping 22-yard free-kick tipped over by Forest keeper Karl Darlow, but the visitors struggled to make any impression as they were outplayed by the East Midlands side.

Forest striker Greg Halford found himself in on goal after a fortunate deflection and only a last-ditch sliding tackle from Driver denied him the chance to shoot from close range.

Halford, who had scored three goals in as many games operating as a makeshift forward, then headed another chance straight at keeper Adrian following a well-worked move.

The home side's main regret would have been they were not further ahead, and that feeling was compounded when Eric Lichaj was through on goal only to have his low shot saved, with Henri Lansbury shooting high from the rebound.

Forest's inability to turn their dominance into more goals was almost punished as the visitors briefly rallied after the break.

Lletget had a deflected shot parried away by Darlow, who also had to palm a Morrison shot wide before the home side's nerves were settled.

Paterson made the most of Halford holding off a defender to latch onto a loose ball, surging into the area and finishing with a drilled left-foot shot.

The forward then made the most of a Lansbury lay-off to drive in his second via a deflection before completing his hat-trick with a powerful shot after running across West Ham's box.

The Hammers fell apart and, after Reid shot home, referee Martin Atkinson's final whistle was all that could end their misery.

"I think someone was waiting to be hit for four or five here. Our play has been very good and we created a host of chances, I'm delighted with the way we played.

"I have to say we know [West Ham boss] Sam Allardyce has bigger fish to fry... We know he has injuries like ourselves.

"But before the game we were concerned, because in [Stewart] Downing and [Matt] Jarvis, [Modibo] Maiga and [Ravel] Morrison they had £20m of talent in the front four. We had to make sure we were up for the game, I wish I had £20m worth of front players because they have very good players."