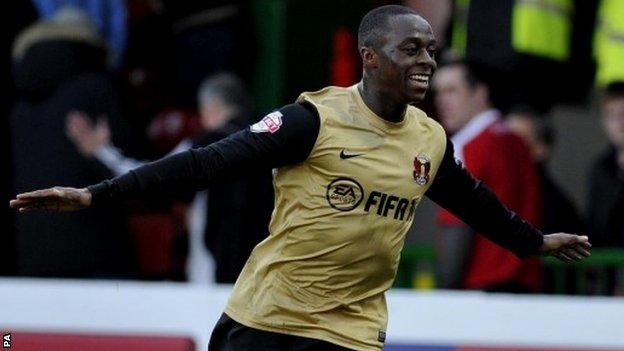 Leyton Orient moved up to second place in League One as they kept up their excellent away record with a deserved victory over Shrewsbury Town .

Aaron Wildig had two good early chances for Town before Orient went ahead when Moses Odubajo sidefooted in after Kevin Lisbie and Jamar Loza played him in.

Shrewsbury came back into the match after the break but Tom Eaves wasted a one-on-one against Eldin Jakupovic.

Leyton Orient have now won all four of their League One meetings with Shrewsbury Town since Graham Turner's men returned to English football's third tier in 2012.

The victory was Orient's ninth on the road in the league this season.

But it was Shrewsbury's fifth straight home defeat, and in the last four of them they have failed even to score.

Orient, who tired in the second half before coming good in the closing 20 minutes, looked by far the more dangerous side, the experienced Lisbie providing a strong focal point along with the highly rated Odubajo.

Shrewsbury lacked creativity, struggling to test visiting keeper Jakupovic, who was called in at lunchtime to make his debut following his loan switch from Hull City.

"Goals change games. We had a really good chance but, given our recent home form and our state of confidence at home we needed to take it - and then they scored.

"Obviously, we've hit a real bad patch and scoring goals is a problem for us.

"It sounds simple, but sometimes it is just a fact of finishing off the chances and putting the ball in the back of the net."