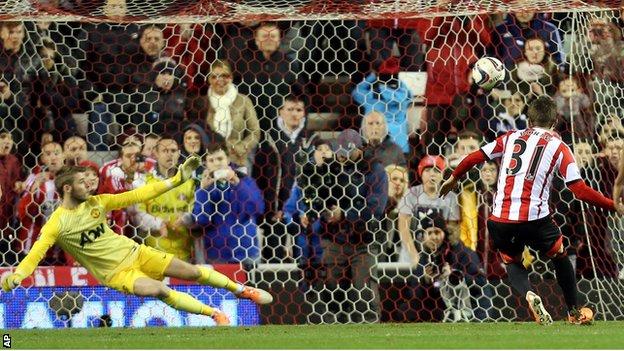 Manchester United lost a third game in a row for the first time since 2001 as Sunderland took a one-goal lead into the Capital One Cup semi-final second leg.

Fabio Borini's second-half penalty, after Tom Cleverley was controversially penalised for a challenge on Adam Johnson, was the decisive goal.

Ryan Giggs' own goal in first-half injury time had put Sunderland ahead.

Nemanja Vidic levelled with a towering header soon after the restart.

But Sunderland earned their first win over United since 2000, a run of 21 matches, when Liverpool loanee Borini kept his calm from the penalty spot after substitute Johnson went down under Cleverley's challenge.

United were furious with the decision but Cleverley's attempt to win the ball looked rash as Johnson cut across him, leaving United chasing the game ahead of the second leg at Old Trafford on 22 January.

The defeat deepens the woes of manager David Moyes after United's FA Cup hopes were ended by Swansea on Sunday, while their hopes of retaining the Premier League title appear to be disappearing, with leaders Arsenal 11 points clear.

United have won the League Cup three times in the past decade, in 2006, 2009 and 2010, but a premature exit this time around would leave them relying almost solely on the Champions League to rescue their campaign.

"It's not fair to judge Moyes until he's had a decent crack of the whip in the transfer market. He knows the squad needs massively strengthening.

"He needs two full-backs, a central defender and at least two midfielders, all, needless to say, top class. It's not that easy though, not in January.

"Yes, they won the Premier League last year, but old guard are a year older. Opposition have upped their game. And the incalculable Fergie factor."

Sunderland's own cup form provides a welcome distraction to their perilous Premier League situation. Gus Poyet's men are bottom of the table but went into the tie looking for a sixth straight home win in knockout competitions this season.

The hosts' backline had a few familiar faces for United fans with Wes Brown and John O'Shea, who both made more than 300 appearances for the visitors, in the centre of defence and another former Red, Phil Bardsley, at right-back.

And, despite almost 18,000 empty seats at the Stadium of Light, they looked relatively untroubled until, out of the blue, Giggs saw a 20-yard shot cannon of the crossbar via a slight deflection after a driving run from the 40-year-old through midfield.

Adnan Januzaj, at 18 less than half the age of Giggs, scored both goals on his full debut in a 2-1 win at Sunderland in October.

He thought he had broken the deadlock for United when he calmly slotted home after his initial shot had been blocked by Giggs, only for the Welshman to be correctly flagged offside.

Giggs' evening got even worse in first-half injury time when he diverted the ball into his own net as he tried to prevent Bardsley from tapping home, after Brown had volleyed Sebastian Larsson's deep free-kick back across goal.

Sunderland, losing League Cup finalists in 1985, were not ahead for long as Vidic towered above Brown and O'Shea to head Cleverley's corner into the net soon after the restart.

With the game swinging from end to end, Larsson's volley was parried away by United goalkeeper David De Gea before the hosts again took the initiative in controversial circumstances.

Referee Andre Marriner looked to have waved play on when Johnson tumbled under Cleverley's challenge in the penalty area but, after being advised by his assistant that contact had been made, he pointed to the spot. Borini made no mistake from 12 yards.

United poured forward unsuccessfully in a search of a leveller but, with away goals counting double after extra-time in the second leg, Sunderland will know a lot of hard work is ahead before they book their place at Wembley - despite ending United's seven-match unbeaten run away from home.

"We know how difficult it will be at Old Trafford. We know how good they are, but to have a chance you need to take advantage of the home leg. We scored the two goals to give us that little advantage.

"We are going to try and play our game at Old Trafford. It is not a bad result but of course it is going to be very difficult.

"The most important thing of the day is to have Adam Johnson back to his best, he will be crucial for us."