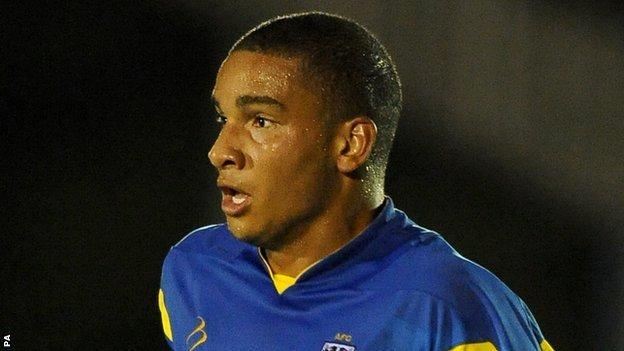 Hereford grabbed a point at Forest Green thanks to Chris Bush's goal.

The hosts started well as Anthony Barry's shot was parried onto the post by Dan Lloyd-Weston, while Al Bangura's header was cleared off the line.

James Norwood set up Marcus Kelly to put Forest Green ahead, before Danny Wright's shot flew over the crossbar.

But Bush's turn and shot from Jonathan Brown's pass secured his side a draw, before the home side's Dale Bennett was shown a red card for dissent.

Substitute Reece Styche twice went close to winning it for Rovers, his second attempt brilliantly saved by Lloyd-Weston, while Sam Russell saved one on one from Michael Rankine at the other end.

Cash-strapped Hereford, who have this week had a winding-up order served on them by HM Revenue and Customs, were playing their first game in 12 days, since beating Forest Green 1-0 at Edgar Street on 28 December.

After successive postponements due to the wet weather, their timely run of just one defeat in four games has lifted them to 16th in the Conference Premier - eight points clear of trouble.

"It was a fantastic hard-earned point. We had to weather the storm in the first 15 minutes, but then we started to believe in ourselves.

"These are the ones of the best teams in the league. They have quality players from the level above, if not more.

"But we have a good team spirit. Numbers are small, but we just get on with it and grind out performances.

"It was a top drawer finish from Chris Bush. People say his defending has to improve but he gives us so much in other ways."