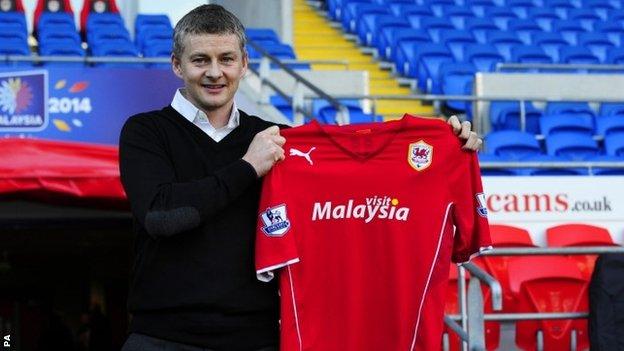 Cardiff City's appointment of Ole Gunnar Solskjaer as manager carries an element of risk for both the Norwegian and the club's unconventional owner, Vincent Tan.

Bluebirds chairman Mehmet Dalman, who has acted out the role of diplomat, broker and pursuer of new managers in a traumatic fortnight for the Premier League newcomers, said he was like "the cat that got the cream" after securing the services of the former Manchester United striker, his first choice.

How long the smiles last depend on how quickly Solskjaer can make Cardiff supporters overcome the sense of resentment many still feel at the treatment and subsequent dismissal of the popular and successful Malky Mackay.

Grey hairs may have added a little age to the one-time "baby-faced assassin" of Old Trafford, but behind the 40-year-old's boyish mask lies a street wisdom that will serve him well in south Wales.

Tan is investing a lot - literally, if talk of a £25m January transfer fund becomes reality - in a manager who is a rookie in Premier League terms but who now carries the heavy responsibility of keeping Cardiff in the division.

At the same time, Solskjaer must also build a bridge between Tan and the many supporters who have lost faith in him.

Solskjaer had a fine reputation for his work on Manchester United's coaching team under Sir Alex Ferguson and was an instant success with Molde in Norway, winning two titles and a cup following his appointment in 2010.

Former United team-mate Gary Neville described him as "intelligent, with a studious football brain", adding that he "works his backside off".

Such has been his rise that he was previously linked with jobs at Aston Villa and Blackburn Rovers before assuming control at Cardiff.

But the task facing him now is still a journey into unknown territory, no matter how many Premier League observations he has made in recent years.

Tan and his cohorts know this appointment must succeed.

If Cardiff are relegated after the messy dismissal of Mackay, it is unlikely that the club's passionate fans will point the finger of blame in Solskjaer's direction.

The Norwegian is also taking a gamble with his own reputation, from master goalscorer, winner of six Premier League titles and scorer of a Champions League-winning goal with United in 1999 to life now as a coach and manager.

He is still in his infancy as a boss but he will know careers can be set back by one unwise choice, one unwitting step into the wrong environment.

The feeling a few days ago was that Solskjaer had gone cold on the Cardiff job after seeing what happened to Mackay and perhaps after taking soundings from trusted advisors around him.

His smile and obvious delight on Thursday put all that to rest, revealing he had spoken to Ferguson, his great mentor, before agreeing to take the job.

He was also at pains to dismiss whispers that Ferguson had suggested he should give City a wide berth.

Nevertheless, Solskjaer will surely have sought assurances against any interference from Tan in team affairs.

The Norwegian must stand or fall by his own methods, not those of his Malaysian owner, especially at this early stage of his managerial career.

But learning from the great Scot while a player does not always guarantee unqualified success as a manager, as Roy Keane might testify.

Solskjaer has clearly been impressed by the manner in which Dalman relayed Tan's vision for Cardiff.

After talks with Tan, the manager revealed that "communication and dialogue will be key", adding: "Everything isn't exactly what it seems from the outside."

The final observation may come as some relief to many Cardiff supporters who have protested about the running of their club, from the changing of shirt colours to the sacking of Mackay, which plenty found undeserved and inexplicable.

Dalman was at Solskjaer's side as he took his first steps as Cardiff manager and will hope he can now spend some time in the background after the turmoil of recent events.

He, at least, looked to be trying to hold it all together in the face of mounting odds over the Christmas period.

If Dalman deserves a break, Cardiff's supporters deserve one even more.

What should have been a wonderful adventure in their first season in the Premier League has been turned into a sideshow by the broken relationship between owner and now departed manager, who guided them into the top tier.

Solskjaer's sole objective this season will be to keep Cardiff up, but he will need to make a fast start if lingering ill-feeling among supporters towards Tan about Mackay's treatment and his approach to running their club is to be diluted.

He has already made it clear he will be adopting a positive tactical approach but results will be everything and Solskjaer can expect financial backing to achieve them.

But unity on and off the pitch will be the key to the new regime's chances of success.

"I go into this with my eyes wide open," insisted Solskjaer.

He will hope his vision will include a future without the division, rancour and airing of dirty laundry that has characterised Cardiff in recent times.