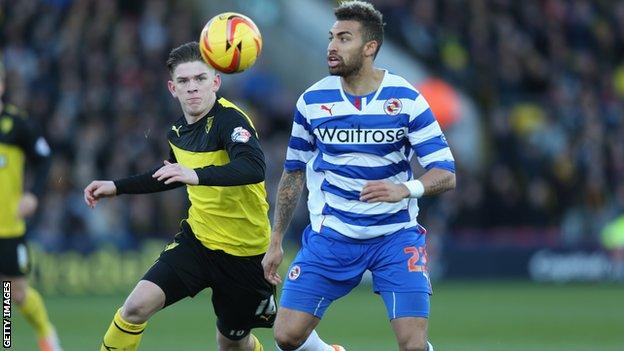 A header and stinging shot from Troy Deeney were saved by Reading goalkeeper Alex McCarthy, before Fernando Forestieri fired over from six yards.

McCarthy saved from Lewis McGugan late on, before Watford debutant Alexander Merkel was sent off for a poor tackle.

Since succeeding Gianfranco Zola in December, head coach Sannino had guided Watford to a win and three draws prior to the visit of Nigel Adkins's side.

The hosts created the bulk of the chances at Vicarage Road, but Reading, with McCarthy excelling, showed a resilience to earn a first win in six matches.

Despite their poor run of form, the win moves the Royals to within one point of the play-offs.

Watford, who missed promotion in the play-off final last season, remain in the bottom half of the table.

Gorkss glanced his fifth-minute header past Manuel Almunia after Obita's fine delivery and the lead was almost extended when Jobi McAnuff shot wide.

Barring a wayward Adam Le Fondre shot, Reading spent much of the second period under pressure as they protected only their second goal in five matches.

Deeney's header and shot on the turn forced McCarthy into action, before the striker's cross was blazed over by the unmarked Forestieri.

It was Watford's golden chance to extend their four-match unbeaten run and when Merkel saw red for a reckless challenge on Nick Blackman, their frustrating day was complete.

"I would like to see my players always play good football, nice and easy football as well, but we were a little bit slow today.

"It was difficult to come out with the ball. We played a lot of back passes which disappointed me, that was the point I didn't like today. But it is a part of my job. What we saw in the second half is giving me a lot of positives."

"I thought we played some good football in the first half against what I believe is a good side in Watford.

"We've got a lot of players out who have been out injured for a long time and obviously (it comes) on the back of a couple of disappointing results over Christmas.

"Obviously the form over Christmas with the results going against us wasn't ideal and Leicester are doing a great job now where they are in the league.

"But we're back on track for the play-off positions with 21 games to go and we're really going to enjoy the second half of the season."