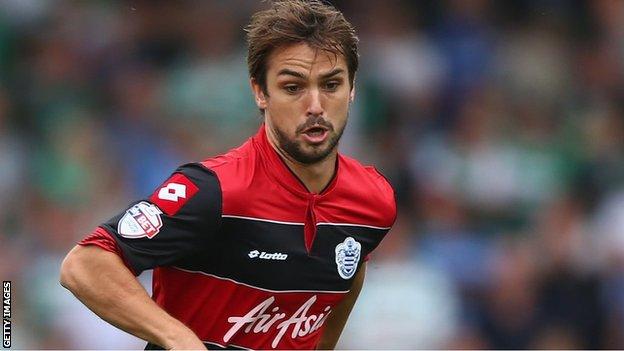 QPR kept up the pressure on the Championship's top two thanks to victory at in-form Ipswich.

Niko Kranjcar gave QPR the lead on 52 minutes with a low right-foot finish, before Gary O'Neil pounced on a rebound from Charlie Austin's shot.

Armand Traore added a third six minutes after coming off the bench after some indecisive defending from Tommy Smith.

Ipswich were nine matches unbeaten prior to the visit of QPR.

Smith scored a stoppage-time consolation for the home side, who fell to their first defeat in 10 games.

The result leaves QPR a point off the automatic promotion places in third, while Ipswich slip three places to ninth.

A goalless first half saw both sides miss chances to take the lead.

Ipswich's Luke Chambers was denied by a smart save from Rob Green, before a goalmouth scramble saw the ball cleared by Joey Barton.

Austin then had two chances to put QPR ahead, the first a close-range header which was tipped over by Dean Gerken before Christophe Berra made a last-ditch tackle inside the area.

The breakthrough did not come until seven minutes into the second half from Croatia midfielder Kranjcar, who calmly slotted home after skipping into the box. And within 22 minutes, they were 3-0 up thanks to O'Neil and Traore.

Smith's late goal was not enough to end Ipswich's recent run as they dropped out of the play-off spots.

"We were excellent first half and I was immensely proud of that performance against a team who are probably still favourites to go up with Leicester.

A much needed away win

After picking up three away wins from four games at the start of the season, QPR have won just two of their last nine matches on the road.

"But we let them off the hook and then slightly gifted the game to them. They had that bit of quality with Niko Kranjcar's first goal before the second goal killed us."

"It was always going to be a difficult game as they have been on a terrific run. Ipswich started very brightly and had a couple of good opportunities.

"But we came back into the game and we were much better in the second half.

"The goals didn't look like coming in the first half but the first goal eased us a little and meant they had to chase the game."