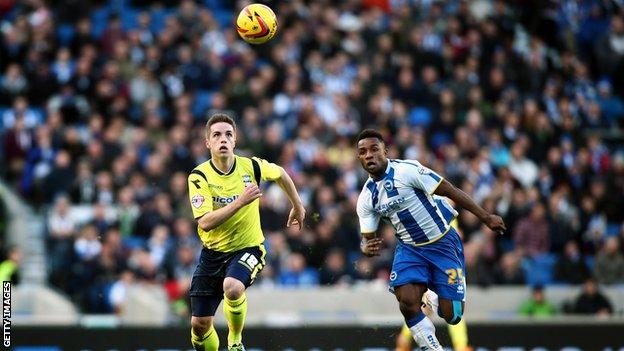 Lopez struck after the interval, the 31-year-old Spaniard finding the bottom corner of the net after Andrew Crofts had seen his shot parried.

Birmingham had their chances, Chris Burke firing over before Kazenga LuaLua and Burke were both denied.

But Brighton deserved their win, with Crofts and Lopez both going close.

The Seagulls have lost only one of the last seven outings and are now five points behind fourth-placed Derby.

Birmingham, who failed to score for the third time in five games, are 17th in the Championship table, eight points above the relegation zone.

Blues boss Lee Clark can have few complaints, with the hosts managing 24 shots compared to seven by the visitors.

From Basque Country to Brighton

David Lopez began his career at Osasuna and moved to Athletic Bilbao for €6m in 2007 but left after struggling for first-team opportunities. He has 11 goals in 59 appearances for Brighton.

Striker Jonathan Obika, signed on a 93-day loan from Tottenham, came on for his Seagulls debut with 25 minutes remaining

And the 23-year-old helped set up a chance for Lopez to double the lead but this time he could not find the net.

Brighton manager Oscar Garcia: "Yes, we are sixth, but I am pleased because we won the match and once again the performance of the team was very good.

"That is all, I don't want to comment further about our position in the league.

"I asked the players to be patient. We had to show Birmingham some credit as they were unbeaten in their last ten matches."

Birmingham manager Lee Clark: "We were a bit frustrated with our work in the final third.

"The quality of our final pass was not up to the required standard.

"We weren't clinical enough but the players have shown me terrific character."