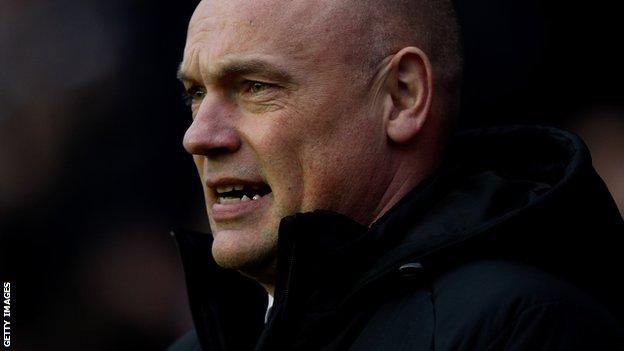 Wigan stretched their unbeaten run to seven games with a convincing 3-0 win over Bournemouth at the DW Stadium.

Marc-Antoine Fortune opened the scoring after five minutes, shooting into the top corner past Lee Camp.

Elliott Ward deflected Fortune's 58th-minute effort into his own net before Jordi Gomez added the third with a left-foot strike in the final minute.

Wigan climb to 10th with the win and within three points off the Championship play-off places.

Uwe Rosler is yet to lose a game since taking over as Wigan manager last month.

And after Fortune's early strike, the home side should have gone into the second half more than a goal ahead.

James McArthur shot wide before Callum McManaman and Nick Powell both spurned two chances each before the break.

Bournemouth held on until Ward's unfortunate own goal with Tokelo Rantie, Lewis Grabban and Marc Pugh creating their best chances.

Wigan keeper Ali Al Habsi was on hand to answer what the Cherries offered in attack, ensuring a fourth-straight clean sheet for the Latics in the league.

Gomez then rounded off the win with a superb shot from 30 yards.

"We started the game very well - the scoreline at the end could have been the score after 20 minutes.

"We've set some standards now and we've got to keep that going.

"I personally think there is more to come from us, which is a very positive sign.

"We're not getting carried away, especially not under the gaffer - because he won't allow us to do that.

"He's very similar to Roberto Martinez in terms of work ethic, and I think everyone at the club appreciates that."

"We weren't at our best today, I think that was pretty clear.

"We didn't start the game very well - the real Bournemouth didn't turn up to play.

"We were under pressure, we gave the ball away in dangerous areas which is unlike us, and it was only in the last half hour when we came alive."