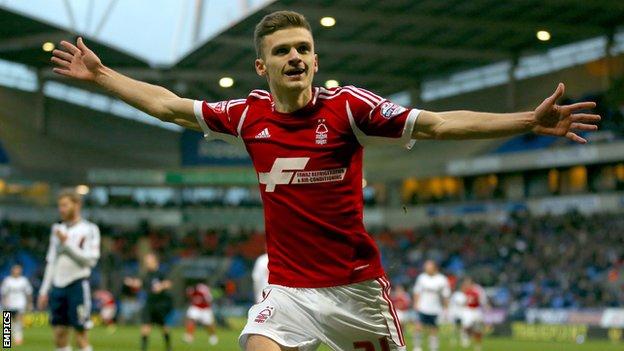 Nottingham Forest extended their unbeaten run to nine matches but were denied victory as Bolton fought back from a goal behind to gain a point.

Nottingham Forest's draw was their 11th in the Championship this season, more than any other team in the division.

And Bolton goalkeeper Andy Lonergan produced an excellent one-handed save to block Andy Reid's powerful follow-up as Billy Davies's side missed the chance to claim their fourth win in five games.

They remain fifth in the Championship, though they are now nine points behind second-placed Burnley.

Bolton, who took only five points from their opening 10 matches of the season, will be happy with the draw, a result that leaves them 18th and seven points above the bottom three.

Wanderers had the first opportunity when Mark Davies forced Karl Darlow to make a low save in a first half that contained few goalscoring chances.

But Forest opened the scoring within two minutes of the restart when Paterson collected a fine pass from Halford and delicately slotted the ball past Lonergan for his fourth goal in two matches.

Despite not being fluent in attack, the Trotters claimed an equaliser which their hard work deserved.

After winning a free-kick on the edge of the box, Moritz's outswinging cross was helped on past Darlow by Mills.

Both sides had late chances to win it, with Forest coming the closest when Halford fired against the post after a beautifully weighted pass from Henri Lansbury. The ball fall to Reid, whose low shot was superbly saved.

"I wasn't happy because we created enough opportunities in the first half to take the lead.

"In the second half we made a very good Nottingham Forest side look ragged towards the end of the game.

"That's a great credit to our players."

"It was a frantic game of football that could have gone either way.

"Defensively we were excellent and the only thing that we are lacking is that clinical finishing up front."