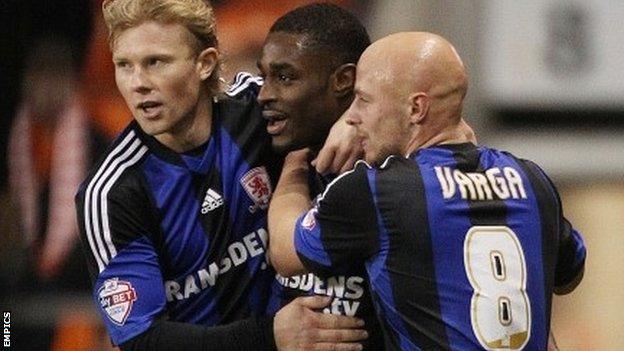 Mustapha Carayol scored twice in the last 10 minutes as Middlesbrough condemned Blackpool to their eighth defeat in nine matches.

The Gambian opened the scoring six minutes from time when he cut in from the right before bending his shot into the bottom right-hand corner.

And Carayol fired home his second in the third minute of stoppage time from Albert Adomah's pass.

The result moves Boro to 13th in the Championship, with Blackpool 14th.

Boro on a run

Middlesbrough are unbeaten in their past four league games.

The hosts had the best of a bright opening with Barry Ferguson testing visiting goalkeeper Shay Given with an 18-yard volley, before Craig Cathcart nodded wide a left-wing cross from Tom Ince.

Middlesbrough also went close when Lukas Jutkiewicz was through on goal, but he was prevented from shooting by Cathcart's brilliant tackle.

After the break, Blackpool again looked to seize the early initiative, with Chris Basham heading wide from a Neal Bishop right-wing cross, before a succession of corners put the visitors under pressure.

But it was Boro who finally broke the deadlock when a counter-attack allowed Carayol to cut in from the right before curling low past Matt Gilks.

And the away side wrapped up the win deep into added time when Blackpool failed to deal with Adomah's cut-back, allowing Carayol to fire into the top left-hand corner.

"The players are working hard but we're lacking quality in the final third.

"We told the lads before the game and at half-time that we needed to watch the counter-attack and we've been done twice, which is frustrating.

"We felt we were starting to get on top of the game and we got hit by a sucker punch."

"I said when I first came here when we lost two or three games, my philosophy is always thinking about the next game.

"We were three points away from the relegation places and now we're not far from the play-offs - but my mentality is the same."