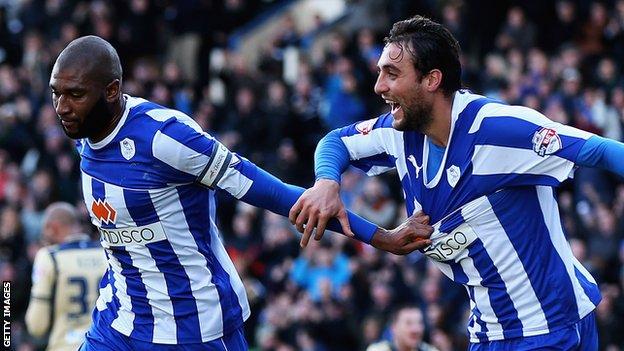 Reda Johnson opened the scoring before Atdhe Nuhiu made it 2-0 on the stroke of half-time.

Leeds were reduced to 10 men just a minute after the restart when Matt Smith, on at the break, was sent off for a challenge on Johnson.

Connor Wickham and Chris Maguire both scored before Caolan Lavery added his first two goals for the club.

Owls keeper Chris Kirkland was a spectator throughout the game at Hillsborough with Leeds managing just one shot on target, a long-range effort by Rodolph Austin which was easily collected.

The result was the first time in their history that Sheffield Wednesday have beaten Leeds United by a six-goal margin.

Leeds went in to the game without a win in their last five matches and knocked out of the FA Cup by League Two Rochdale last weekend.

They looked like a side lacking in confidence and were behind after they failed to clear their lines following a corner. The ball in from Kieran Lee was allowed to find Johnson at the far post and he took the ball down before poking it past Kenny.

The former Sheffield United and QPR keeper made a superb save from Maguire but could do nothing when again his defence again failed to clear a cross from Lee, which Nuhiu side-footed home at the far post.

Leeds boss Brian McDermott made a change at the break with Smith replacing Tom Lees as he looked to put the Wednesday defence under more pressure but the former Oldham man lasted less than a minute when Lee Probert was given little option after his aerial challenge on Johnson.

Wickham made it 3-0 with his ninth goal of the season before a free-kick from Maguire took a wicked deflection to beat a beleaguered Kenny.

Lavery scored three goals in four games for Plymouth before he was recalled from a loan spell by Gray and he scored twice after coming on as a second-half substitute to take his tally for the season to five.

The result means Wednesday are now five games unbeaten in five games and have picked up 15 points since Dave Jones was sacked at the beginning on December.

Gray, who previously managed Northampton Town, has now guided Wednesday up to 19th in the table with a game in hand over many of the teams around them.

"It was a good result and a good performance, hopefully a 6-0 win will help me to get the job full-time.

Bad day at the office

As well as seeing his side concede six goals, Leeds defender Jason Pearce forgot to take the tag off his new replica kit.

"I remember I was caretaker at Southampton and our last two games at The Dell we beat Arsenal and Manchester United, so it's probably up there with those. And I got the job.

"After that, in a local derby, it's public humiliation as far as I'm concerned.

"It has to start on Sunday morning and I'll go back to basics with this team to do what ever we've got to do as a group.

"That was just unbelievable. It doesn't matter about being lower than the Rochdale game, that's just humiliating for all of us.

"I don't distance myself from the players because I'm part of the group. We've had a good run to get to 35 points, but we're having a poor time now.

"It's a terrible time for Leeds United, the supporters and us."