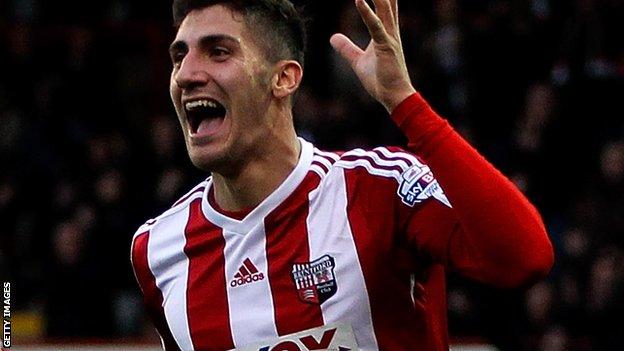 Brentford ensured they stayed top of the League One table after goals from Marcello Trotta and Will Grigg saw them overcome Port Vale.

The Bees went ahead before the break when on-loan Trotta unleashed a powerful strike from outside the box.

Clayton Donaldson almost doubled their lead, but saw his effort disallowed for a foul on Vale keeper Chris Neal.

Vale struggled find a response and went two down just before full time when Grigg tapped the ball home.

The win was Brentford's eighth in a row and they have not lost a league fixture in 15, their last defeat coming away to Stevenage in October.

"There is no secret, the players are professionals and do what they do well and enjoy what they do and when it comes together we will be in good shape.

"We were sloppy, but we rectified it and the player who have come in have done really well and you need the strength in depth of the squad, you need 14 or 15, not just a strong eleven.

"Alan Judge found his feet, showed his quality and combined well with the forwards, and I was pleased with his debut."

Shots on Target
Home13
Away0