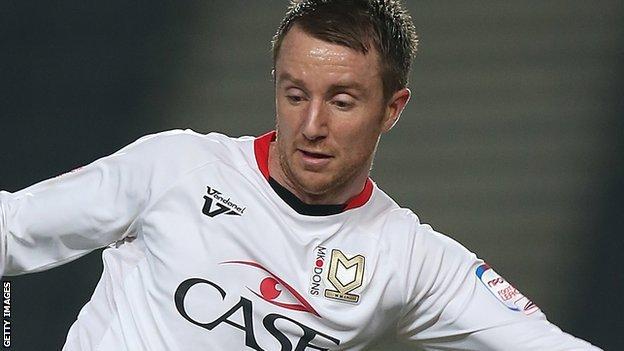 Dean Bowditch scored on his return from injury as MK Dons beat Shrewsbury.

Dele Alli nodded the home side ahead within five minutes before Ryan Woods bundled home for the visitors.

Everton loan man Chris Long squeezed in a rebound to put the Dons in front on his debut before Bowditch extended their lead with a superb shot.

"I think all your headlines should be about an 18-year-old scoring - that's remarkable.

"The story goes I made him cry when he came on trial at Liverpool at age seven.

"He certainly made me happy today. I'm very pleased to get him - he has got a lot more learning to do, but I'm going to work very hard with him."

"I don't think there's many clubs anywhere in the country that can boast our youth and energy."

"When we went 3-1 down we showed a lot of character to get back into the game.

"When you concede so early in the game like that your game plan goes out the window, so to equalise so quickly was good.

"But when you look at the number of crosses and set-plays that we got into their box, we deserved to get something.

"It was sloppy defending from us for two of their goals and that is disappointing - as we showed a lot of fight to get back into it."