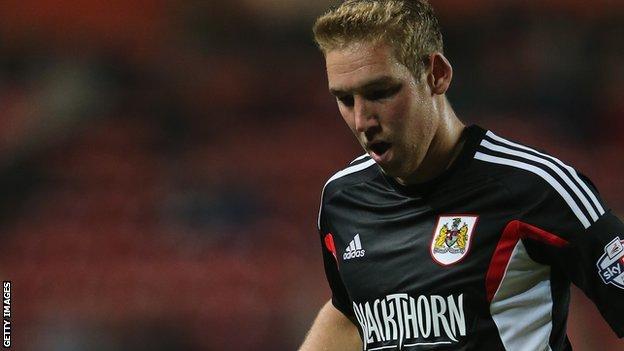 Scott Wagstaff was on target as lowly Bristol City came from behind to secure a valuable point at Bradford.

James Hanson put the hosts ahead with less than a minute gone when he poked the ball past goalkeeper Elliot Parish following Gary Jones's corner.

The Robins equalised soon after through Wagstaff produced a well-struck volley after Jay Emmanuel-Thomas's flick.

Emmanuel-Thomas and Jones both hit the post in an open second period, but neither side could snatch a winner.

Despite the result, the visitors dropped to 23rd in the table, but four points clear of bottom side Stevenage, while Bradford are 12th, having now gone eight matches without victory.

"I thought we played well again, it was entertaining.

"It's a tough place to come and get a result - their big crowd gets behind them and you don't get decisions that you're hoping to get as the away team.

"It was a good response by us - I think we scored a fantastic goal. The pleasing thing is that it came from things we have been practising on the training ground."