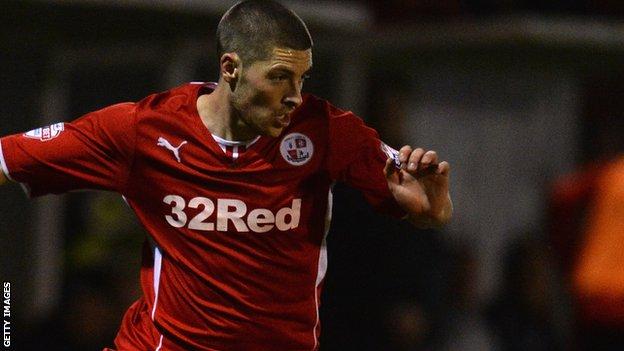 Jamie Proctor and Adam Drury scored two goals in the final seven minutes to earn Crawley a point at Coventry.

An own goal gave the Sky Blues the lead when Andy Webster's header went in off Crawley defender Joe Walsh.

Franck Moussa doubled their lead eight minutes from time with a header, but Proctor pulled a goal back a minute later, again with his head.

With just three minutes to go, Drury equalised from six yards out after Coventry failed to clear a corner.

"I'm disappointed to only draw after being 2-0 up with only 10 minutes remaining.

"Especially given that we were playing with no recognised striker, I thought we were excellent in the first half.

"In the second half, we didn't manage to pass with the same consistency and they came back into the game.

"The message I gave the players was: let's find a different way to win this game of football. At 2-0 it looked as if we'd found that way.

"But then an individual switched off and an individual did not do his job and let his team-mates down so I'm bitterly disappointed."

"A point is no more than we deserved.

"I think in the second half we were certainly the better side - their goal was against the run of play.

"But to pick ourselves, and for the substitutes to come on and work hard and get back into the game was really pleasing.

"We've seen that the players aren't willing to give up and there's a prove of good team spirit here."